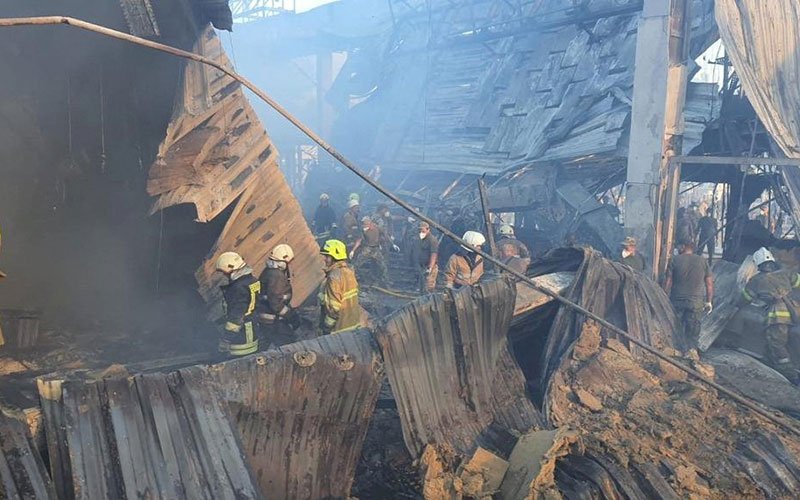 Rescuers work at a site of a shopping mall hit by a Russian missile strike in Kremenchuk, Ukraine, June 27, 2022. (CNS photo by Press service of the State Emergency Service of Ukraine handout via Reuters)

VATICAN CITY (CNS) — Pope Francis again pleaded for an end to hostilities in Ukraine after missiles struck a shopping center filled with people.

“I carry in my heart every day the dear and tormented Ukraine, which continues to be scourged by barbaric attacks, like the one that struck the Kremenchuk shopping center,” the pope said June 29 after praying the Angelus prayer with pilgrims gathered in St. Peter’s Square.

According to the Ukrainian government, an estimated 1,000 people were inside the mall June 27 when two missiles struck it, killing at least 20 people.

“More than 20 are already known to have been killed and 59 wounded,” Tymoshenko said, according to news reports. “There are also more than 40 statements from relatives about missing people who may have been in the mall during the shelling.”

The attack also drew condemnation from G-7 leaders who were meeting in Germany at the time of the attack.

Russia, however, denied striking the shopping center. In a statement published the day after the attack, Russia’s defense ministry said its forces “struck a weapons depot storing arms received from the United States and Europe with high-precision air-based weapons.”

“The detonation of stored ammunition for Western weapons caused a fire in a non-functioning shopping center located next to the depot,” the statement said, according to the Reuters news agency.

Pope Francis renewed his call for peace and called on Christians to “not neglect to come to the aid of the Ukrainian people, who are suffering so much.”

“I pray that this senseless war may soon come to an end, and I renew the invitation to persevere, tirelessly, in prayer for peace: May the Lord open those paths of dialogue that men are unwilling or unable to find!”