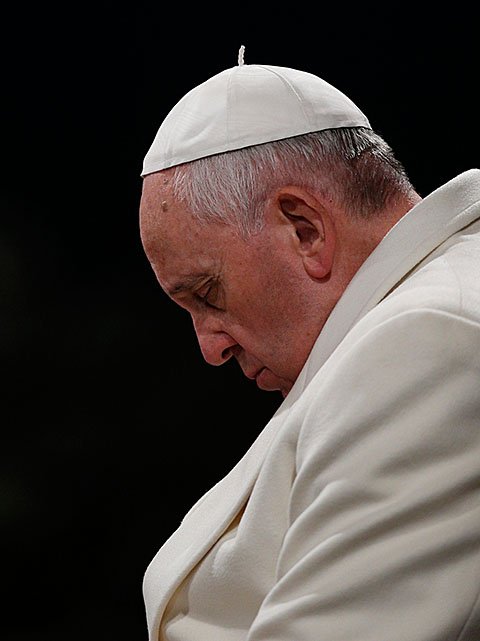 Pope Francis bows his head during a gathering in Rome in April. SPeaking June 20, he condemned legalizing marijuana and other so-called "recreational drugs." "The lives of more and more young people and adolescents are in danger," he said.

"No to every type of drug use. It is as simple as that," Pope Francis said June 20 during an audience with about 450 representatives of national and international drug enforcement agencies.

The representatives, who came from 129 countries, participated in the International Drug Enforcement Conference June 17-19 in Rome. The annual conference, initiated by the U.S. Drug Enforcement Agency in 1983, is designed to help law enforcement officials coordinate anti-drug policies and promote international cooperation in fighting the organized crime of drug trafficking.

Pope Francis said he would not be surprised if international drug trafficking leads the world in income production, and "this is sad."

Even worse, he said, too many young people around the world never get a job offer, but frequently get offered drugs.

"The lives of more and more young people and adolescents are in danger," he said.

"Let me state this is in the clearest terms possible: The problem of drug use is not solved with drugs," he said. "Drug addiction is an evil, and with evil there can be no yielding or compromise."

Allowing addicts to use narcotics or offering them "substitute drugs," he said, is not a treatment, "but rather a veiled means of surrendering to the phenomenon."

And, he said, "attempts, however limited, to legalize so-called ‘recreational drugs,’ are not only highly questionable from a legislative standpoint, but they fail to produce the desired effects."

Pope Francis said he stood with the drug enforcement officials in opposing all drug use, but he urged them to recognize the need for serious prevention programs.