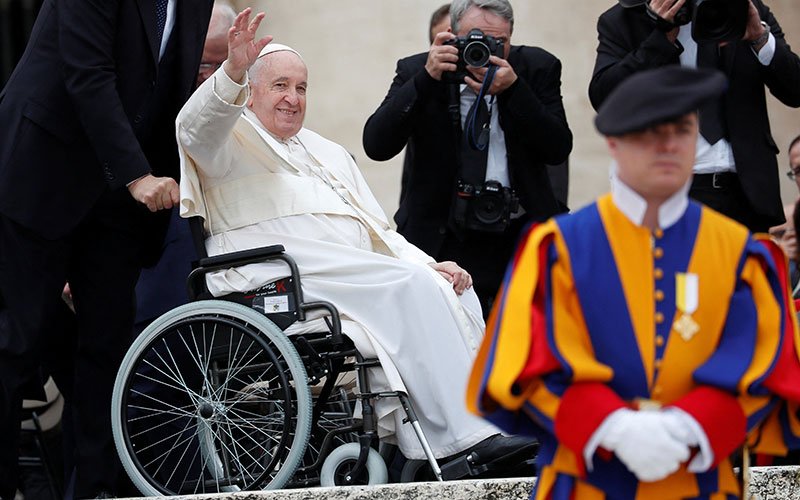 Pope Francis greets people as he arrives for his weekly general audience in St. Peter's Square at the Vatican Nov. 16, 2022. (CNS photo by Remo Casilli/Reuters)

“The spiritual state we call desolation … can be an occasion for growth,” the pope said Nov. 16 during his weekly general audience in St. Peter’s Square.

“Indeed, if there is not a little dissatisfaction, healthy sadness, a healthy capacity to dwell in solitude, to stay by ourselves without fleeing, we risk always remaining on the surface of things and never making contact with the center of our existence,” he said.

“Desolation causes a ‘rousing of the soul,’ it keeps us alert, it fosters vigilance and humility, and protects us from the winds of fancy,” which are indispensable for growth, he said.

Continuing his series of audience talks on spiritual discernment, the pope reflected on desolation and why the feeling occurs.

In an earlier audience, Pope Francis had defined desolation as the “darkness of the soul” and the inner sense of unrest and dissatisfaction.

During his Nov. 16 catechesis, the pope said the dark, sad moments challenge complacency, prompt people to appreciate God’s graces and act as an incentive to grow in one’s spiritual life by drawing closer to Jesus.

“For many saints, restlessness was a decisive impetus to turn their lives around,” he said.

But, he said, when someone lives in a world of “perfect” and “artificial serenity” where they ignore or do not try to understand their true feelings, they will be “indifferent to the sufferings of others and incapable of accepting our own.”

“Important choices come at a price,” the pope said, but it is “a price that is within reach of everyone.” It is a price paid with prayer, discernment and the effort of coming to a decision.

Paying the price of making a decision is also needed “to get out of a state of indifference, which always drags us down,” he added.

Experiencing desolation is an invitation to no longer take for granted the people in one’s life, he said, but rather to deepen those relationships, including with God.

“Let us think of our childhood,” he suggested. “As children often we look for our parents to obtain something from them, a toy, some money to buy an ice cream, permission. And so, we look for them not for themselves, but for gain. And yet, they — our parents — are the greatest gift, and we understand this gradually as we grow up.”

Often people’s prayers also are like that — simply requests for favors without any real interest in Jesus, Pope Francis said.

“It may seem strange, unreal, to ask the Lord, ‘How are you?'” the pope said. But “instead, it is a beautiful way to enter into a true, sincere relationship, with his humanity, with his suffering, even with his singular solitude.”

Do not be discouraged by difficulties and “do not be afraid of desolation,” he said. Move forward with perseverance, “seeking to find Christ’s heart, to find the Lord and the answer will come, always.”