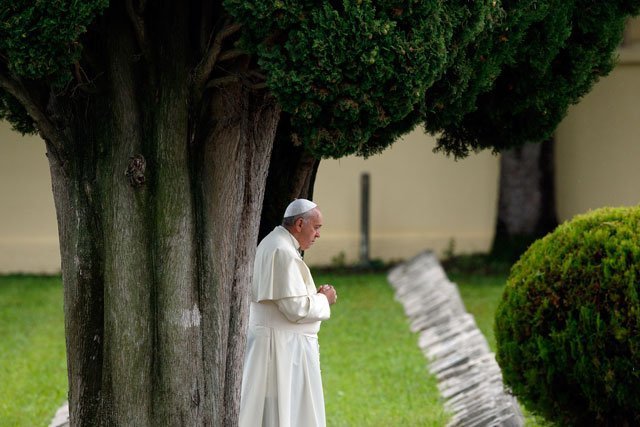 Pope Francis is shown praying at an Austro-Hungarian cemetery for fall soldiers of World War I in Fogliano di Redipuglia, northern Italy, Sept. 13, 2014. Pope Francis has designated September 1 as World Day of Prayer for Care of Creation

VATICAN CITY (CNS) — Like their Orthodox brothers and sisters, Catholics formally will mark Sept. 1 as the World Day of Prayer for the Care of Creation, Pope Francis has decided.

The day of prayer, the pope said, will give individuals and communities an opportunity to implore God’s help in protecting creation and an opportunity to ask God’s forgiveness "for sins committed against the world in which we live."

The text of the letter, dated Aug. 6, was released by the Vatican Aug. 10.

Pope Francis said he was instituting the prayer day for Catholics because he shares the concern of Ecumenical Patriarch Bartholomew of Constantinople, who initiated a similar prayer day for the Orthodox Church in 1989.

Metropolitan John of Pergamon, who represented the patriarch at the public presentation June 18 of Pope Francis’ encyclical, "Laudato Si’," had suggested there that all Christians join in prayer Sept. 1.

"This would mark a step toward further closeness among them," he had said.

Pope Francis said Christians want to make their special contribution to safeguarding creation, but to do that they must rediscover the spiritual foundations of their approach to earthly realities, beginning with an acknowledgment that "the life of the spirit is not dissociated from the body or from nature," but lived in communion with all worldly realities.

The ecological crisis, he said, is a summons "to a profound spiritual conversion" and to a way of life that clearly shows they are believers.

Quoting his encyclical, he said, "living our vocation to be protectors of God’s handiwork is essential to a life of virtue; it is not an optional or a secondary aspect of our Christian experience."

The annual World Day of Prayer for the Care of Creation, Pope Francis said, will be a time for individuals and communities to "reaffirm their personal vocation to be stewards of creation, to thank God for the wonderful handiwork which he has entrusted to our care, and to implore his help for the protection of creation as well as his pardon for the sins committed against the world in which we live."

The pope asked Cardinal Koch to consult with and work with the Catholic Church’s ecumenical partners and the World Council of Churches to make sure the prayer day becomes a sign of Christians’ commitment to work together to safeguard creation "in order to be more credible and effective."

He entrusted to the Pontifical Council for Justice and Peace the task of working with Catholic bishops’ conferences and environmental organizations to publicize and coordinate the specifics of the celebration.

"I invoke upon this initiative the intercession of Mary, mother of God, and of St. Francis of Assisi, whose Canticle of the Creatures inspires so many men and women of goodwill to live in praise of the Creator and with respect for creation," he said.