Pope: Don't leave home without it; take Gospel on the go - Catholic Courier 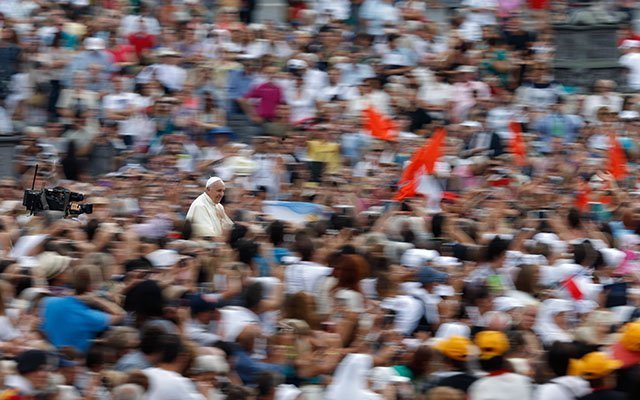 Pope Francis arrives to lead his general audience in St. Peter's Square at the Vatican Sept. 17.

VATICAN CITY (CNS) — Tuck the Gospel in your pocket and put on your walking shoes to share Christ’s love, peace and joy with the world, Pope Francis said.

It is the Holy Spirit who inspires Christians to "overcome every obstacle, to conquer the temptation of being closed up in oneself — among a chosen few" and to prevent people from believing they are "the only one destined for God’s blessing," he said at his weekly general audience in St. Peter’s Square Sept 17.

The pope continued a series of talks on the nature of the Catholic Church, focusing on what it means to say the church is catholic and apostolic.

The word catholic means the church is universal, he said.

The church is found everywhere "and teaches the whole truth that mankind must learn regarding the heavens and the earth," he said.

One sign of the church’s universality is that it speaks every language of the world.

The Gospel was translated into the world’s different languages, the pope said, so people could read it and encounter the living Word.

"It’s always a good idea to carry with us a small book of the Gospels to have in your pocket or bag, and, during the day, to read a verse. It’s good for you," he said.

The reason the church is universal, in fact, is because it is missionary, he said.

The Holy Spirit enabled the apostles and the whole church to "go out" and proclaim to the ends of the earth the good news of salvation and God’s love, he said.

Without the presence of the Holy Spirit, a group of Christians could end up believing, "We are the chosen ones, just us," he said.

But such a group "eventually dies; first their spirit dies, and then they will die as a body because they have no life, they are not able to generate life in others, in other peoples, they are not apostolic," the pope said.

"If the apostles had stayed put, there in the Cenacle," where they shared the Last Supper with Jesus and where Jesus appeared to them after his resurrection, "without going forth to preach the Gospel, then the church would only be a church for that people, in that city, in that room. But they all headed out for the world," he said.

The church was born "heading out, meaning it is missionary," he said. The church is apostolic because it is founded on the apostles and remains in continuity with them, he said.

The pope asked people to give thanks to the Lord for inspiring so many "heroic" missionaries, who "left everything behind in order to proclaim Jesus Christ" to the world.

The church has had many missionaries and "still needs many more," he said, urging young people to follow God’s call and be courageous in bringing the Gospel to the ends of the earth.

Being part of a church that is catholic and apostolic means the faithful must "take to heart the salvation of all of humanity, to not be indifferent to or removed from the fate of our brothers and sisters, but rather to be open and in solidarity with them."

It also means people should always feel "sent off" on a mission that is "in communion with the successors of the Apostles and to proclaim — with their heart full of joy — Christ and his love for all of humanity."