Pope: Drop the melodrama, pray for strength, for those truly in pain - Catholic Courier 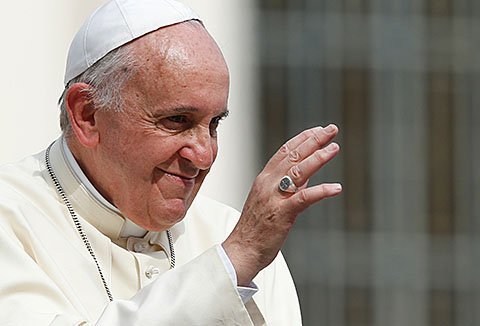 Pope Francis waves as he leaves his general audience in St. Peter's Square at the Vatican Sept. 17.

Instead, use life’s inevitable difficulties to pray for strength and pray for those who are suffering real tragedy, he said in a morning homily Sept. 30.

"Our life is too easy, our complaints are melodramatic complaints" compared to the many people suffering from debilitating disease, hunger and persecution, he said in remarks reported by Vatican Radio.

The pope’s homily focused on the day’s reading from the Book of Job, in which Job curses the day he was born after losing everything that was dear to him (Jb 3:1-23).

When people experience hardship, they may be plagued by doubt; even Jesus on the cross asked God, "Why have you forsaken me?" the pope said during an early morning Mass in the chapel of his residence, the Domus Sanctae Marthae.

The pope said when people talk to him about their difficult or painful situation, he encourages them to keep asking God, "Why?"

"Because this, too, is a prayer. It was a prayer when Jesus told his father, ‘Why have you forsaken me?’" and when Job cried out in his own desperation, he said.

Real prayer involves being absolutely honest before God about one’s thoughts and feelings, he said.

"Real prayer comes from the heart, out of the moments one is living." People turn to prayer "in times of darkness, when there is no hope in life, when you can’t see the light at the end of the tunnel."

Think of all the Christians being forced to flee from their homes, losing everything; the elderly who have been abandoned by their families; the ill without anyone visiting them in the hospital, he said.

Yet, they can find consolation in knowing the whole body of the church is taking on their burdens and praying for them, he said.

But some people are "not sick, not hungry, without pressing needs, when there’s a little darkness in the soul, and we think we’re martyrs and we stop praying."

Someone might say: "’I’m angry with God. I’m not going to Mass anymore!’ But why? For such a little thing," he said.

People can look to St. Therese of Lisieux and how, during her dying days, she confronted doubts over whether there is eternal life or if it "all ends in nothing."

"She prayed and asked for strength to go on in the darkness. This is called entering into patience."

The pope said people should do two things: "Prepare your heart" for the inevitable moments of darkness, which should not be as bad as Job experienced, and "pray as the church prays, pray with the church for so many brothers and sisters who suffer in exile from themselves, who are in darkness and suffering, without any hope at hand."