Pope: Elderly called to be 'teachers of tenderness' - Catholic Courier 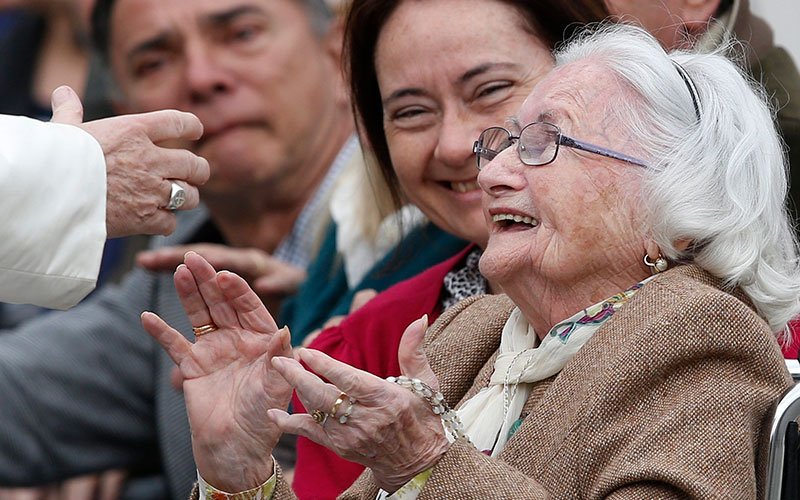 An elderly woman reacts as she meets Pope Francis during his general audience in St. Peter's Square at the Vatican in this March 22, 2017, file photo. The Pope's Worldwide Prayer Network released a video June 30, 2022, of the pope offering his prayer intention for the month of July dedicated to the elderly. (CNS photo by Paul Haring)

VATICAN CITY (CNS) — The elderly can find purpose in their old age by teaching future generations about the value and importance of tenderness, Pope Francis said.

Elderly men and women often have “a special sensitivity for care, for reflection and affection” that is sorely needed in today’s war-torn world, the pope said in a video message released by the Pope’s Worldwide Prayer Network June 30.

“We are, or we can become, teachers of tenderness. And indeed, we can!” he said. “In this world accustomed to war, we need a true revolution of tenderness.”

At the start of each month, the network posts a short video of the pope offering his specific prayer intention. For the month of July, the pope dedicated his prayer intention to the elderly. The Catholic Church celebrates the World Day for Grandparents and the Elderly each July on the Sunday closest to the feast of Sts. Joachim and Anne, Jesus’ grandparents. The celebration is July 24 this year.

In his video message, the pope noted the high number of older men and women in the world compared to young people and said that today, there are “many plans for assistance for the old age, but few plans for existence.”

Nevertheless, grandparents and the elderly can find meaning by passing along their wisdom to future generations, he said.

Younger Christians, he added, must cherish their elders who “are the bread that nourishes our lives, the hidden wisdom of a people.”

Concluding his prayer intention, Pope Francis prayed that elderly men and women can become “teachers of tenderness so that their experience and wisdom may help young people to look toward the future with hope and responsibility.”