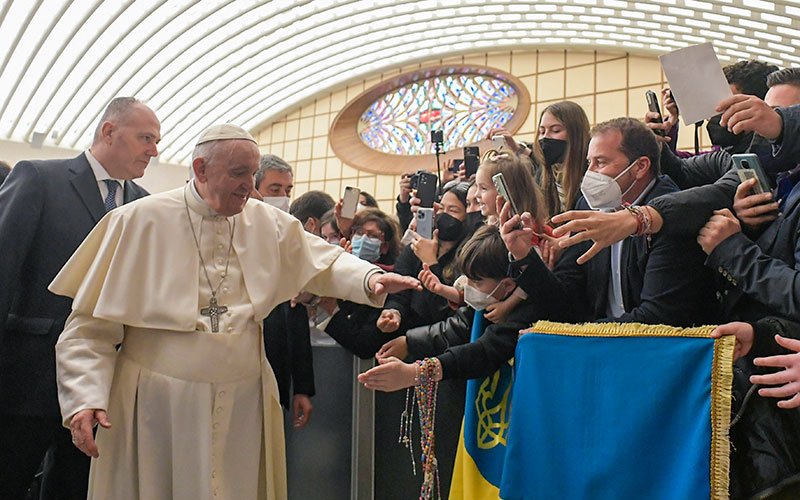 Pope Francis walks near a flag with the national colors of Ukraine during his general audience in the Paul VI hall at the Vatican March 16, 2022. (CNS photo by Vatican Media)

Pope: Longevity of elderly a reminder to take things slow

VATICAN CITY (CNS) — In a world still reeling from the COVID-19 pandemic and starting to feel the threat of nuclear war between Russia and Western nations, Pope Francis said that symbol of Noah and the great flood that wiped out humanity “is gaining ground in our subconscious.”

The allure of technological progress to eradicate illness and prolong life is often mingled with the focus on the “final catastrophe that will extinguish us, such as would happen with an eventual atomic war,” he said March 16 at his weekly general audience.

“The ‘day after’ this — if we are still here, days and human beings — we will have to start from scratch. Destroy everything to start again from scratch,” the pope said.

“Now more than ever,” he said, “the wisdom of the elderly is needed to prevent the path of self-destruction by denouncing corruption and a relativistic lifestyle.”

Pope Francis was continuing his series of talks dedicated to the meaning and value of old age and reflected on the theme, “Seniority, a resource for a carefree youth.”

Elderly people, the pope said, can easily “grasp the deception” that often ensnares young people into obsessing over ephemeral pleasures that lead to a “life without thought, without sacrifice, without interiority, without beauty, without truth, without justice, without love; this is all corruption.”

Reflecting on the biblical account of the great flood and God’s decision to wipe out humanity after seeing “how great the wickedness of the human race had become on the earth,” the pope noted that, in his wisdom, God entrusted saving life on the earth to Noah, “the oldest of us all.”

Using symbolic language, he said, the Bible presents God’s actions as a “paradoxical twist of mercy,” since eliminating humanity would spare future victims from “corruption, violence and injustice.”

Recalling Jesus’ warning that the coming of the son of Man would catch people unaware, just as they were before the flood, the pope explained that when people focus solely on enjoying life, they tend to not perceive corruption or ignore it.

With their life experience, older people are more adept at spotting corruption and at being “prophets against corruption as Noah was in his time.” However, he also warned of those elderly people who “have not matured and become old with the same corrupt habits of the young.”

“We, women and men of a certain age — not to say old, because some are offended — must not forget that we have the wisdom to say to others, ‘Look, this path of corruption leads nowhere,'” Pope Francis said.

“We must be like good wine that in the end, when aged, can give a good message and not a bad one,” he said.