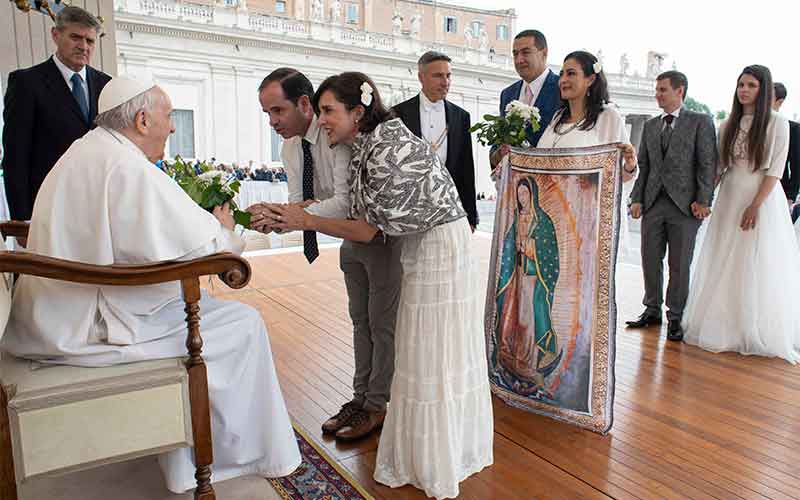 Pope Francis greets newly married couples during his general audience in St. Peter's Square at the Vatican May 4, 2022. The large banner is of Our Lady of Guadalupe. (CNS photo by Vatican Media)

VATICAN CITY (CNS) — Elderly Christians are called to be consistent in their faith, otherwise they risk becoming a sign of hypocrisy for future generations, Pope Francis said.

Addressing elderly men and women present at his weekly general audience May 4, the pope urged them to “please be attentive to young people, they are watching us.”

“Young people are watching us. And our consistency can open a beautiful path of life for them,” he said. On the other hand, “hypocrisy can do so much damage.”

The pope, who suffers from a torn ligament in his knee, remained seated in his popemobile while greeting pilgrims gathered in St. Peter’s Square. In an interview with the Italian newspaper Corriere della Sera published May 3, the pope said he is receiving therapeutic injections to alleviate the pain in his right knee.

Before concluding the audience, Pope Francis apologized for being unable to greet newlyweds personally and said he hoped the problem with his knee would “pass soon and I can go to you in future audiences.”

The pope continued his series of talks dedicated to the meaning and value of “old age” and reflected on the biblical figure of Eleazar, an elderly Maccabean who was killed for refusing to eat meat sacrificed to idols.

His example, the pope said, gives witness to “the special relationship that exists between the fidelity of old age and the honor of faith.”

“The honor of faith periodically comes under pressure, even violent pressure, from the culture of the rulers, who seek to debase it by treating it as an archaeological find, an old superstition, an anachronistic obsession,” he said.

Even when asked to “pretend to eat the meat without actually doing so,” he added, Eleazar refused to dishonor his faith and risk scandalizing younger generations in exchange for “a handful of days.”

“An old man who has lived in the coherence of his faith for a whole lifetime, and who now adapts himself to feigning repudiation of it, condemns the new generation to thinking that the whole faith has been a sham, an outer covering that can be abandoned, imagining that it can be preserved interiorly,” the pope said.

Older people who accept “that the practice of faith is irrelevant” also risk teaching young people to give in to gnosticism, he said, by making them believe that faith “can be faked or concealed because it is not particularly important for life.”

The gnostic interpretation of faith, he added, “nullifies the realism of Christian faith.”

“Instead, this gnostic proposal says, ‘Just pretend; the important thing is that you have spirituality within you and then you can do whatever you want.’ And this is not Christian. It is the first heresy of the gnostics, which is very fashionable these days in so many spirituality centers and such,” he said.

Pope Francis encouraged older Christians to give witness to the faith in a way that “shows the concrete signs of God in the life of the community and resists the perversions of the mind through the gestures of the body.”

“Perhaps it is up to us older people — and there are some present here — to give faith back its honor,” the pope said. “The practice of faith is not the symbol of our weakness, but rather the sign of its strength.”

“Faith deserves respect and honor,” he added. “We will show, in all humility and firmness, precisely in our old age, that believing is not something ‘for old people.’ And the Holy Spirit, who makes all things new, will gladly help us.”