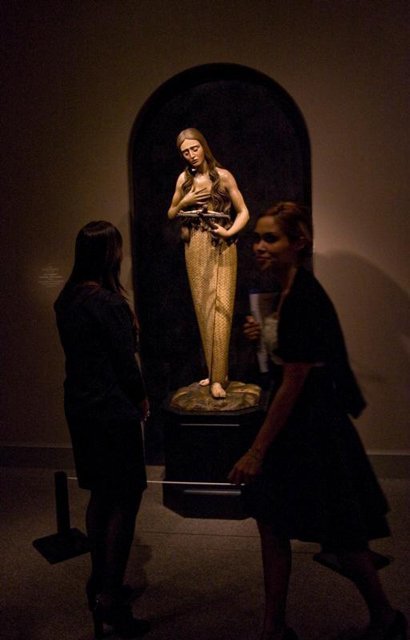 St. Mary Magdalene is shown meditating on the crucifix in this painted wooden sculpture that is part of The Sacred Made Real exhibit in 2010 at the National Galley of Art in Washington.
By Junno Arocho Esteves
Catholic News Service
VATICAN CITY (CNS) — Recognizing St. Mary Magdalene’s role as the first to witness Christ’s resurrection and as a "true and authentic evangelizer," Pope Francis raised the July 22 memorial of St. Mary Magdalene to a feast on the church’s liturgical calendar, the Vatican announced.
A decree formalizing the decision was published by the Congregation for Divine Worship June 10 along with an article explaining its significance.
Both the decree and the article were titled "Apostolorum Apostola" ("Apostle of the Apostles").
In the article for the Vatican newspaper, Archbishop Arthur Roche, secretary of the congregation, wrote that in celebrating "an evangelist who proclaims the central joyous message of Easter," St. Mary Magdalene’s feast day is a call for all Christians to "reflect more deeply on the dignity of women, the new evangelization and the greatness of the mystery of divine mercy."
"Pope Francis has taken this decision precisely in the context of the Jubilee of Mercy to highlight the relevance of this woman who showed great love for Christ and was much loved by Christ," Archbishop Roche wrote.
While most liturgical celebrations of individual saints during the year are known formally as memorials, those classified as feasts are reserved for important events in Christian history and for saints of particular significance, such as the Twelve Apostles.
In his apostolic letter "Dies Domini" ("The Lord’s Day"), St. John Paul II explained that the "commemoration of the saints does not obscure the centrality of Christ, but on the contrary extols it, demonstrating as it does the power of the redemption wrought by him."
Preaching about St. Mary Magdalene, Pope Francis highlighted Christ’s mercy toward a woman who was "exploited and despised by those who believed they were righteous," but she was loved and forgiven by him.
Her tears at Christ’s empty tomb are a reminder that "sometimes in our lives, tears are the lenses we need to see Jesus," the pope said April 2, 2013, during Mass in his residence, the Domus Sanctae Marthae.
Pope Francis also mentions her specifically in the prayer he composed for the Year of Mercy: "Your loving gaze freed Zacchaeus and Matthew from being enslaved by money; the adulteress and Magdalene from seeking happiness only in created things; made Peter weep after his betrayal, and assured paradise to the repentant thief."
Archbishop Roche explained that in giving St. Mary Magdalene the honor of being the first person to see the empty tomb and the first to listen to the truth of the resurrection, "Jesus has a special consideration and mercy for this woman, who manifests her love for him, looking for him in the garden with anguish and suffering."
Drawing a comparison between Eve, who "spread death where there was life," and St. Mary Magdalene, who "proclaimed life from the tomb, a place of death," the archbishop said her feast day is a lesson for all Christians to trust in Christ who is "alive and risen."
"It is right that the liturgical celebration of this woman has the same level of feast given to the celebration of the apostles in the general Roman calendar and highlights the special mission of this woman who is an example and model for every woman in the church."
– – –
Follow Arocho on Twitter: @arochoju.
Copyright © 2022 Catholic News Service, Inc. All rights reserved. Linking is encouraged, but republishing or redistributing, including by framing or similar means, without the publisher's prior written permission is prohibited.