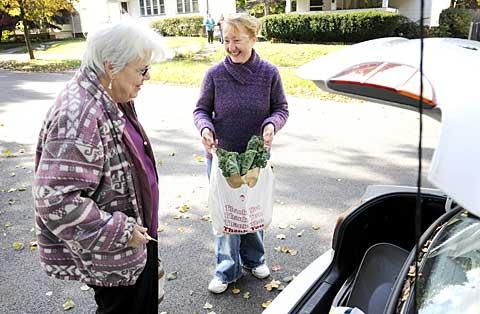 In this photo from 2008, Judy Brawley (left) and Bess Porter Johnson get fresh produce and support local farms through a community-supported agriculture project.

In fact, on the 43rd-annual World Day of Peace on Jan. 1, he shared a message titled "If You Want to Cultivate Peace, Protect Creation." In this message, he emphasized the connection between caring for the environment and poverty, peace and the use of economic resources, noted Kathy Dubel, justice-and-peace director for Catholic Charities of Chemung/Schuyler.

"You realize that it’s very integral to just about every issue we’re working on," Dubel said.

You’re definitely not alone if you hadn’t made that connection.

"I don’t think until I had read the pope’s letter that I had made the connection between peace and going green," said Father James Fennessy, pastor of St. Mary Parish in Waterloo and St. Patrick Parish in Seneca Falls.

Yet awareness of this connection seems to be growing, Dubel said, partly because of the efforts of Pope Benedict, who has occasionally been referred to as "the green pope." Since 2006 he has repeatedly asked Catholics and all people to commit to caring for their environment. In April 2007 the Vatican invited dozens of scientists, politicians, activists and church officials to attend a two-day conference on climate change, and in 2008 he approved the installation of solar panels on several Vatican buildings and is striving to make the Vatican the world’s first carbon-neutral state.

In his World Day of Peace message, Pope Benedict said protection of God’s creation is essential for mankind’s peaceful coexistence. The environment is God’s gift to the entire human family, he said, and while humans have been given dominion over all other life and creatures, they also are called to be good stewards over this gift.

It’s important for us to understand this responsibility, Dubel said.

"He really does root (the message) in that covenant and the fact that creation — and we are part of creation — is God’s, and we hold it in our hands as a gift, not to use up and destroy, but to use responsibly," she said.

"You can go back to Genesis on that," he noted.

Pope Benedict calls Catholics to work to protect the environment regardless of their personal or political feelings about global climate change. He asked those living in the more technologically advanced societies to be prepared to "encourage more sober lifestyles," reduce their energy consumption and increase their efficiency, but said these steps will benefit all peoples, whether rich or poor.

"I would advocate the adoption of a model of development based on the centrality of the human person, on the promotion and sharing of the common good, on a realization of our need for a changed lifestyle and on prudence, the virtue which tells us what needs to be done today in view of what might happen tomorrow," Pope Benedict stated in his message.

If changing our lifestyles helps us to live more sustainably and benefits the common good and all people, then it’s a positive change, Dubel said. It’s an added benefit if these actions happen to avert or mitigate the negative consequences of global climate change, she added.

Being a good steward means protecting the environment for future generations, thus respecting their human dignity and passing on their natural inheritance, Pope Benedict stated in his message. Those who enjoy economic freedom, initiative and creativity also share a responsibility to serve the common good by finding effective ways to address climate change. The needs of the poor, weak and vulnerable must be respected, since they most directly bear the burden of humanity’s environmental carelessness, he said.

"The whole letter is rooted in Catholic social teaching, in all of the kinds of virtues and principles that we hear over and over again," Dubel said. "I think we don’t often think about the environment in relation to the poor, or to peace or to economic decisions, but when we have an economy that exploits or has degraded natural resources, it’s an economy that really can’t flourish."

The Diocese of Rochester has been working for several years now to increase local Catholics’ awareness of their call to be good stewards of God’s creation. In 2006 the Diocesan Public Policy Committee worked with the New York State Catholic Conference to win grants from the U.S. Conference of Catholic Bishops. In 2007 the committee then distributed seed grants to about 20 parishes and schools to help them begin projects related to global climate change or caring for creation, Dubel said.

"All kinds of wonderful things were happening in our parishes and schools as a result of that," she remarked.

Permanent ministries and committees devoted to environmental stewardship soon began popping up at many parishes and schools, even those that had not received grant money, Dubel said. Recently, members of the Diocesan Public Policy Committee decided to call representatives from many of those groups together for a gathering, and to invite anyone interested in learning more about environmental stewardship or in starting their own parish or school groups.

This gathering is scheduled for March 20 from 10 a.m. to 3 p.m. at Church of the Transfiguration, located at 50 W. Bloomfield Road, Pittsford. The event will feature booths, displays and representatives from at least 20 groups and ministries as well as short lectures from six guest speakers, who will discuss such issues as environmental stewardship’s basis in Catholic social teaching and the way young children, including the unborn, are especially vulnerable to environmental dangers, Dubel said.

"It’ll be a supermarket of ideas in the parish hall at Transfiguration. It’ll be a fun exchange of ideas for some folks," she said.

Transfiguration’s Care for God’s Creation Ministry is cosponsoring the event, and the ministry’s members are eager to showcase their efforts and see what other groups are doing, said Dr. Gerry Gacioch, the ministry’s coordinator. Gacioch helped found the ministry four years ago after noticing that none of the parish’s "dozens and dozens" of ministries dealt specifically with environmental concerns.

Each year the Care for God’s Creation Ministry organizes a community-supported agriculture project. Local families sign up and pay a subscription fee, and once a week from May through October a farmer from Lyons delivers organic, locally grown food to the parish for subscribers. The ministry also has brought in a number of experts to speak on topics ranging from biodiesel to water issues in the Great Lakes, Gacioch said.

Gacioch said he’d encourage interested Catholics to join the environmental stewardship groups at their parishes or to start their own if none exist. Individuals don’t need to join or start a formal group in order to make a difference, however. In fact, by taking small steps, such as turning the thermostat down one degree or turning off the heat when they leave the house, they can make a big difference, Dubel said.

"I think it does tend to overwhelm when you think about climate change and all the big forces that are at work," she said. "You have to think, what are the small steps that you can take?"

Father Fennessy said he tries to consider the environmental impact of the choices he makes every day. When he receives a long document or report via e-mail, for example, he’ll think twice about printing it and opt to read it on his laptop’s screen.

"That way I’m not printing out 15 pages of paper that I’m going to throw out in an hour," he said.

He also tries not to be wasteful, recalling a story he once heard about Mother Teresa.

"She would write on a small piece of used paper, and sometimes she would erase it and use the piece of paper over again. Peace through justice was a big deal for her, and she lived that, being conscious and not wasting," Father Fennessy said.

Our consumption may not appear to be linked to a dearth of resources in other places, but the two are invariably linked, he said.

"The world has limited resources. The more we use, the less is available for other people. If we waste, then we’re taking away from other people. That just doesn’t lead to peace," Father Fennessy said.

The most important thing anyone can do is to seriously heed the pope’s call to care for creation, Dubel said.

"It really reflects our love for our creator, and if we destroy his creation, it says something about how deeply we love that creation and our creator. Love is really at the heart, and thankfulness for this awesome earth that we live on," she said.

EDITOR’S NOTE: For more information about the March 20 gathering, contact Kathy Dubel at 607-734-9784 or e-mail her at kdubel@dor.org.