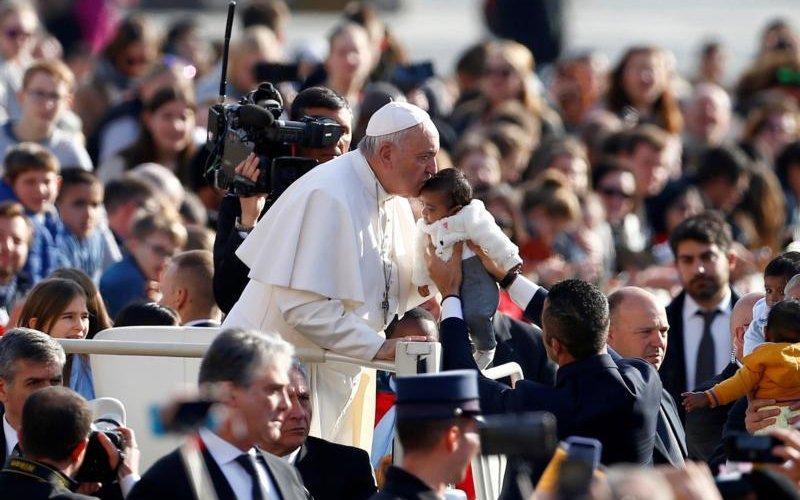 Pope Francis kisses a baby as he arrives for his general audience in St. Peter's Square at the Vatican Feb. 27, 2019. (CNS photo by Yaraara Nardi/Reuters)

VATICAN CITY (CNS) — The holiness of God is a power that is constantly expanding and will defeat all evil once and for all, Pope Francis said.

“Evil’s days are numbered,” the pope said Feb. 27 during his weekly general audience. “One thing is certain: It is evil that should be afraid, and this is beautiful.”

Continuing his audience talks about the Lord’s Prayer, Pope Francis said the prayer is divided into three requests about God — that his name be made “hallowed” or holy, that his kingdom come and that his will be done — and four petitions about basic human needs for daily bread, forgiveness of sins, help in resisting temptation and liberation from evil.

The prayer, he said, has everything that is essential for a Christian prayer: contemplation of God in his mystery and goodness, and a “sincere and courageous request for what we need to live and live well.”

“When we speak with God,” he said, “we do not do it to reveal to him what we have in our heart; he already knows that better than we do.”

Turning to the line “hallowed be thy name,” the pope said it is a recognition of God’s greatness and an expression of hope that all people will recognize and love him for who he is. It also is a plea that “his name would be sanctified in us, in our families, in our communities, in the whole world.”

“God’s holiness is a force in expansion,” the pope said, and people can be assured that evil will never have the final word.