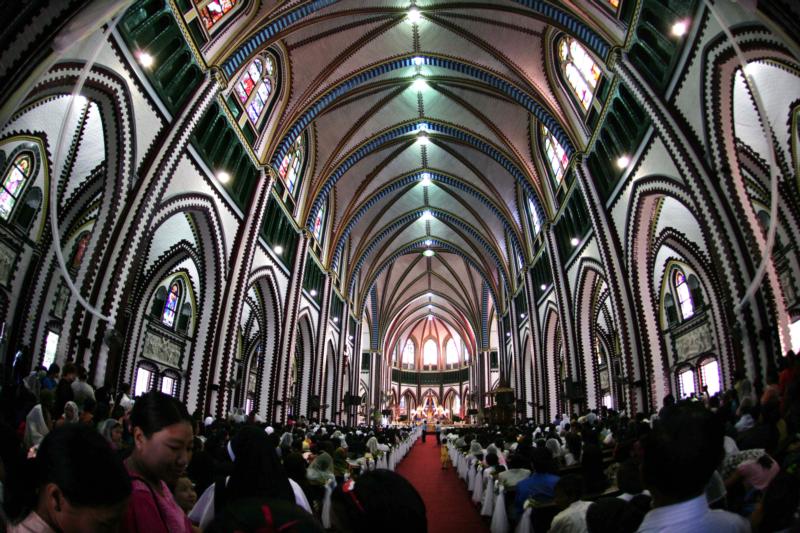 YANGON, Myanmar (CNS) — Pope Francis is expected to focus on trying to improve the troubles of about a million ethnic Muslim Rohingya when he visits Myanmar the last week of November, reported ucanews.com.

The Vatican has acknowledged a possible trip is being studied, but it has said it is too early to confirm the trip. Ucanews.com reported the visit is expected to announced officially in September.

The news has already drawn the ire of hard-line Buddhist groups in Myanmar who have fanned sectarian violence and protest, especially against the Rohingya and other Muslims, over the past five years, ucanews.com reported.

Bishop Raymond Sumlut Gam of Banmaw said a visit by Pope Francis to Myanmar is most likely, although he said he had not officially been informed.

“The Catholic bishops invited Pope Francis before the 500th anniversary of Catholicism in Myanmar in late 2014,” Bishop Gam told ucanews.com. “Some improvements have occurred such as diplomatic relations between Myanmar and Vatican, plus the appointment of an apostolic nuncio.”

President Htin Kyaw also invited the pope. Observers believe that the unexpected move by Myanmar’s civilian-led government was driven by its desire to skirt the powerful military, with which it effectively shares power. Under Myanmar’s 2008 constitution, the military retains the crucial defense, border and home affairs portfolios as well as 25 percent of both houses of parliament.

Last year, Pope Francis had said he hoped to visit India in 2017, but hesitation on the part of the Indian government led Cardinal Oswald Gracias of Mumbai to tell Vatican Radio in June that an Indian trip was unlikely before 2018. Sources told ucanews.com that the current plan calls for the Myanmar visit to precede a visit to Bangladesh.

According to information shared with top clergy in late July, the pope is expected to first visit the capital, Naypyitaw, where he will meet President Htin Kyaw and Aung San Suu Kyi, state counselor and foreign affairs minister and the country’s de-facto leader.

Sources said Pope Francis will celebrate at least two Masses before heading to the country’s largest city and business capital, Yangon, for a large open-air Mass. He is expected to visit and celebrate Mass at St. Joseph’s Catholic Major Seminary in Yangon.

Most of the Rohingya population in Myanmar’s Rakhine state have been denied citizenship. About 120,000 of them are trapped in internally displaced person camps near the state capital, Sittwe. A further 400,000 live in the state’s north, which is currently under martial law.

Media are forbidden to travel to the region, but reports of atrocities by the military, including rape, murder and burning villages, have leaked over the past year. Such outrages have further fueled homegrown violence.

The United Nations says more than 170,000 Rohingya have fled to Bangladesh, Malaysia, Thailand and Indonesia — many on risky boats — in the last five years.

While Pope Francis will not visit Rakhine, he would fly over it on the way to Bangladesh, church sources said, and probably would use that time to make some sort of statement.

One senior clergyman with knowledge of the pope’s visit but not authorized to speak about it told ucanews.com: “The main impetus behind the pope visiting is to try and help the government make peace with the Rohingya and improve their plight.”

Suu Kyi has been widely and increasingly criticized by democratic governments around the world for her hands-off attitude to the Rohingya crisis and her National League for Democracy’s insistence on calling the group not by their self-determined name but as Bengalis.

A papal visit could “be a way for her to change the perception that she is ignoring the plight of the Rohingya, internationally,” one observer noted.