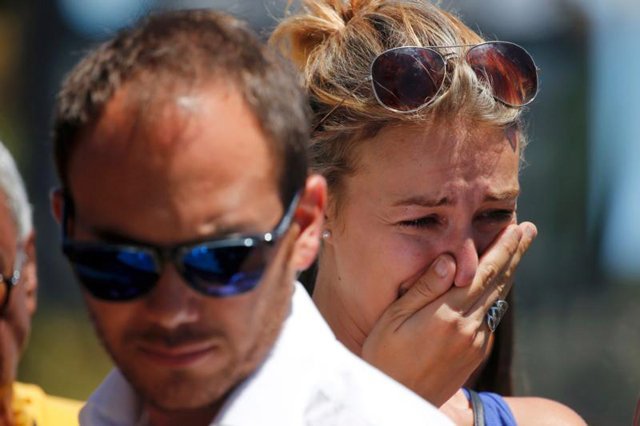 A woman cries July 15 near the scene where a truck ran into a crowd celebrating the Bastille Day in Nice, France, killing more than 80 people. Pope Francis condemned the July 14 attack, calling it an act of "blind violence."

VATICAN CITY (CNS) — Pope Francis offered his help to the people of Nice in a surprise phone call following a deadly attack during Bastille Day celebrations, said the head of an association of Italians living in France.

Paolo Celi, president of the France-Italy Friendship society, told Vatican Radio that he was shocked upon answering his phone and hearing, "Paolo, I am Pope Francis."

"There was a moment of silence from my part. Then he asked me to impart to the entire city of Nice, to all the families of the victims, his message of solidarity and comfort saying, ‘What can I do,’" Celi said in an interview published July 18.

Celi also said the pope expressed his desire to meet with the families of the victims of the July 14 massacre.

"We also spoke for quite some time over the phone about a meeting in Rome in the near future without setting a date," he said.

The pope also spoke on the phone with Christian Estrosi, former mayor of Nice and president of the Regional Council of Provence-Alpes-Cote d’Azur, Celi said. The call, he said, gave Estrosi "the necessary strength in this situation."

Celi, who had left the promenade shortly before the attack happened, also said he was "greatly comforted" by the pope’s gesture.

"With his words, with his comfort, the Holy Father can alleviate this awful memory to restore the vigor and desire for hope of all these people," Celi said.

In his remarks following the recitation of the Angelus prayer July 17, the pope led pilgrims in a moment of silent prayer for the victims of the massacre "in which so many innocent lives, even many children, were mowed down."

"May God, the good father, receive all the victims in his peace support the wounded and comfort the families; may he dispel every plan of terror and death so that no man dares to spill his brother’s blood ever again," he said.