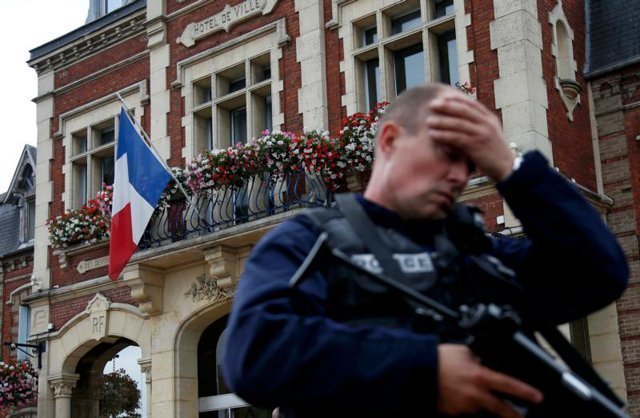 A policeman reacts as he secures a position in front of city hall after two assailants killed 84-year-old Father Jacques Hamel and took five people hostage during a weekday morning Mass at the church in Saint-Etienne-du-Rouvray, France, near Rouen July 26.
By Cindy Wooden
Catholic News Service
VATICAN CITY (CNS) — The murder of a priest in northern France, taken hostage with a handful of other faithful during a weekday morning Mass July 26, is another act of "absurd violence" added to too many stories of senseless violence and death, said the Vatican spokesman.
Pope Francis was informed about the hostage situation at the church in Saint-Etienne-du-Rouvray near Rouen and the murder of 84-year-old Father Jacques Hamel, said Jesuit Father Federico Lombardi, Vatican spokesman.
"With pain and horror" for the "absurd violence," Pope Francis expressed his condemnation of "every form of hatred" and offered his prayers for all those involved.
"We are particularly stricken because this horrible violence occurred in a church — a sacred place in which the love of God is proclaimed — with the barbaric killing of a priest," Father Lombardi said.
Police said two men, armed with knives, entered the church during Mass. They reportedly slit the throat of Father Hamel. Apparently alerted by a member of the congregation who escaped, police killed both hostage-takers. They said another person present at the Mass was in serious condition at the hospital.
Archbishop Dominique Lebrun of Rouen, who was in Krakow, Poland, with World Youth Day pilgrims when the attacked occurred, said he would return to his archdiocese.
"The Catholic Church can take up no weapons other than those of prayer and brotherhood among people of good will," the archbishop said in a statement from Krakow. He said that while he would leave Poland, hundreds of young people from his diocese would remain. "I ask them not to give in to violence," but instead "become apostles of the civilization of love."
Copyright © 2022 Catholic News Service, Inc. All rights reserved. Linking is encouraged, but republishing or redistributing, including by framing or similar means, without the publisher's prior written permission is prohibited.