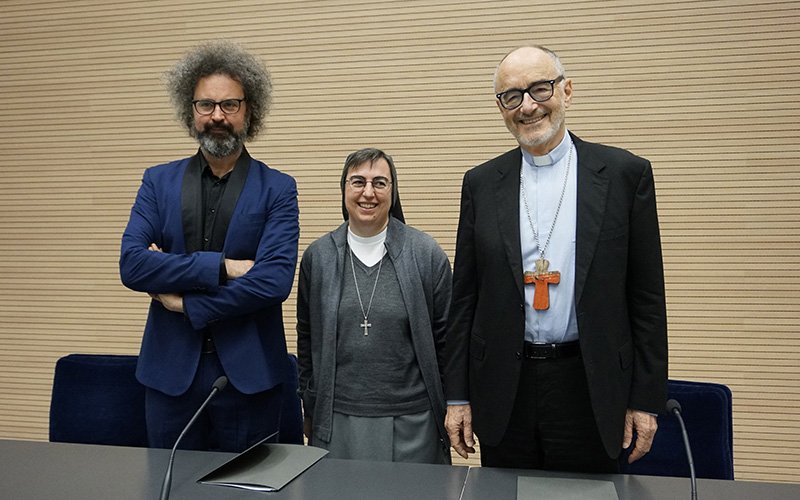 Simone Cristicchi, an Italian singer and songwriter, Salesian Sister Alessandra Smerilli, secretary of the Vatican Dicastery for Promoting Integral Human Development, and Cardinal Michael Czerny, prefect of the same dicastery, are pictured at a news conference Dec. 16, 2022, for the release of Pope Francis' message for World Peace Day, which will be celebrated Jan. 1. (CNS photo by Cindy Wooden)

VATICAN CITY (CNS) — The interconnected “moral, social, political and economic crises” facing the world cannot be solved if individuals and nations continue to focus only on their own, immediate interests, Pope Francis said in his message for World Peace Day 2023.

“The time has come for all of us to endeavor to heal our society and our planet, to lay the foundations for a more just and peaceful world, and to commit ourselves seriously to pursuing a good that is truly common,” the pope wrote in the message, which was released at the Vatican Dec. 16.

The Catholic Church celebrates World Peace Day Jan. 1 and distributes the pope’s message to heads of state and government around the world. Pope Francis personally gives signed copies of it to visiting leaders throughout the year.

The theme for the pope’s 2023 message was “No one can be saved alone,” and the text urged people to learn from the experience of the global effort to combat COVID-19 and to recognize the poverty and inequalities the pandemic laid bare, especially as regards to access to food, medicine, health care, education and technology.

Pope Francis asked people to reflect on a series of questions: “What did we learn from the pandemic? What new paths should we follow to cast off the shackles of our old habits, to be better prepared, to dare new things? What signs of life and hope can we see, to help us move forward and try to make our world a better place?”

War on Ukraine, conflicts around the globe

As soon as it seemed the pandemic was nearly over, the pope wrote, “a terrible new disaster befell humanity. We witnessed the onslaught of another scourge: another war.”

Russia’s war on Ukraine, he said, “is reaping innocent victims and spreading insecurity, not only among those directly affected, but in a widespread and indiscriminate way for everyone, also for those who, even thousands of kilometers away, suffer its collateral effects,” including rising fuel prices and shortages of grain.

“This war, together with all the other conflicts around the globe, represents a setback for the whole of humanity and not merely for the parties directly involved,” the pope said.

Massive cooperative efforts led to vaccines for COVID-19, he said, but “suitable solutions have not yet been found for the war,” even though it is true “the virus of war is more difficult to overcome than the viruses that compromise our bodies, because it comes, not from outside of us, but from within the human heart corrupted by sin.”

“The message gives me hope because it puts a finger on not what some important person needs to do but what each of us needs to do, which is just to take the time to ask ourselves, ‘What did I learn or not learn? And how is my life going to change from there?” the cardinal said. “Hopefully, the lessons will be for the good of everyone.”

People’s experience of the pandemic, the lockdowns, the possibility of continuing to work and the scrambling for vaccines were different around the world, he said, but that experience loses its power if people do not reflect on it and share it.

Pope Francis’ message, he said, is a reminder “that we are too quick to forget” and then humanity is forced to move on to the next disaster without having made changes to alleviate suffering.

A commitment to the common good, promoting solidarity

Salesian Sister Alessandra Smerilli, secretary of the dicastery, told reporters the pope was asking people “to return for a moment to those frightening, difficult and painful moments” at the beginning of the pandemic in early 2020. “This is time to ask ourselves whether, as individuals and a community, are we better or worse off three years later?”

The reflection, Pope Francis wrote, should encourage people to change from a self-centered focus to a real commitment to the common good and to promoting solidarity and a greater sense of fraternity.

Cooperative efforts are needed to ensure health care for all and to “put an end to the conflicts and wars that continue to spawn poverty and death,” he said. People must work together to combat climate change, overcome inequality, end hunger and create dignified work for all.

“We also need to develop suitable policies for welcoming and integrating migrants and those whom our societies discard,” the pope said. “Only by responding generously to these situations, with an altruism inspired by God’s infinite and merciful love, will we be able to build a new world and contribute to the extension of his kingdom, which is a kingdom of love, justice and peace.”