Pope Francis and the sacred right to land - Catholic Courier 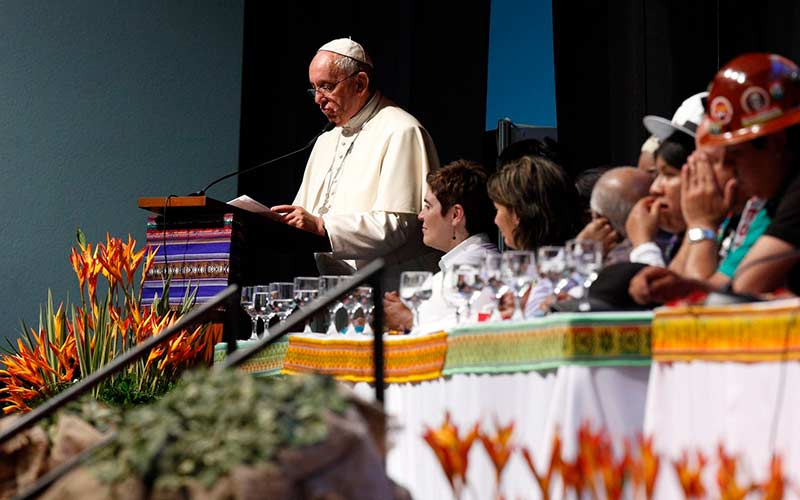 Editor’s Note: This is the first main article in a three-part series on the rights to land, lodging and labor.

Pope Francis is a man with an unusual ability to communicate Catholic social teaching to both the world and the church. Often labeled “the church’s best kept secret,” under Pope Francis it has become a much talked about topic — and sometimes in surprising places.

Off the cuff briefings to journalists on board flights, addresses, interviews and sermons at the Vatican, three major teaching documents and a pandemic book have been his core vehicles for an almost breathless volume of social teaching. That teaching has broken through — as with the environmental teaching of “Laudato Si’, on Care for Our Common Home” — to a truly global audience.

In its simplest form, Pope Francis says that the social message of his pontificate is that we need to learn how to gaze at the world with the eyes of faith: We are called to recognize ourselves as brothers and sisters, fruit of a common creator, living in a common home.

In “Laudato Si'” he offered a teaching on the theology of that common home and identified the threats to it. In “Fratelli Tutti, on Fraternity and Social Friendship,” he talked about a new humanism: how we live together in that common home. The two documents bookend each other.

In response to this language, secular journalists often ask, “This sounds like the pope is a communist?” But such a response ignores, and fails to be literate in, the Catholic social tradition that stands behind the pope’s catchy phrasing. In this series of three articles, we will explore each of these ideas in outline, beginning with land.

One of the least well-understood principles of Catholic social teaching lies behind Pope Francis’ call to see access to land as a sacred right. This is what the tradition calls the universal destination of goods. The created goods of the world are destined to meet the needs, and are for the enjoyment, of all.

St. John Paul II noted that this principle is the “first principle of the whole ethical and social order,” and all forms of ownership and distribution need to be thought in terms of this principle. The right to private property, including ownership of land, is relative to and answerable to this principle.

This teaching has biblical foundations in our reading of the Book of Genesis, the Psalms and the Gospels. As Psalm 24 has it: “The earth is the Lord’s and all it holds, the world and those who dwell in it.”

Addressing the popular movements, Pope Francis’ focus was upon unjust distribution of land, especially for Indigenous peoples and those who still depend on subsistence living. Access to the land is not just about meeting basic needs but also about how cultures and ways of life are preserved.

Commenting on this in “Laudato Si'” Pope Francis writes: “The land of the southern poor is rich and mostly unpolluted, yet access to ownership of goods and resources for meeting vital needs is inhibited by a system of commercial relations and ownership which is structurally perverse” (No. 52).

In “Laudato Si'” a much wider significance is also given to teaching on land, especially in the context of ecological change and degradation. Pope Francis quotes Ecumenical Patriarch Bartholomew of Constantinople:

A sacred right to land implies an environment of land, sea and air preserved and protected from human harm.

Finally, what is crucial to grasp is that for Pope Francis and the wider Catholic social teaching tradition, land is not just functional, an instrument for meeting basic human needs. For Pope Francis, it is part of how we are drawn to God; it is mystical.

He writes in “Laudato Si'”: “The universe unfolds in God, who fills it completely. Hence, there is a mystical meaning to be found in a leaf, in a mountain trail. … The ideal is not only to pass from the exterior to the interior to discover the action of God in the soul, but also to discover God in all things” (No. 233).

Changing the way we gaze at the land — seeing it already as gift — is a crucial first step in rethinking a possessive, instrumental relationship to it, and moving toward a logic of communion, in which the goods of the earth are truly shared: to meet common needs (the needs we all have for sustenance), as beauty and as part of how we apprehend the truth.