Pope Francis and the sacred right to lodging - Catholic Courier 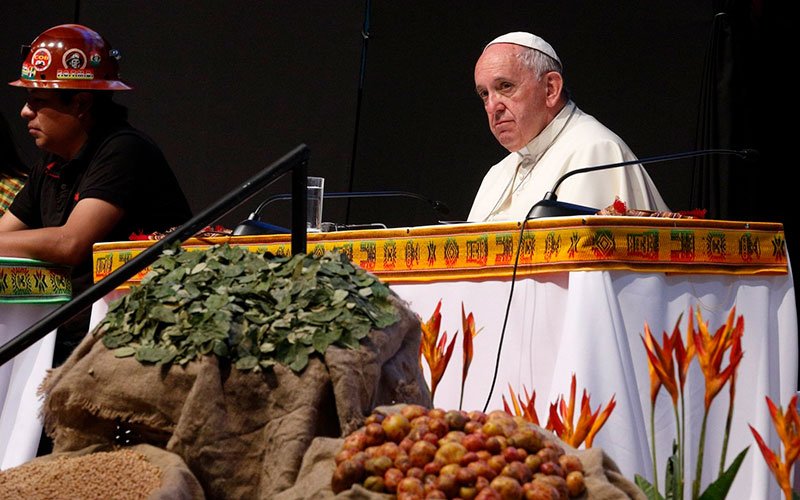 Coca leaves and other products of nature are seen as Pope Francis participates in the second World Meeting of Popular Movements in Santa Cruz, Bolivia, July 9, 2015. In his addresses to popular movements, Pope Francis has called "lodging," or housing, a sacred right. (CNS photo by Paul Haring)

Pope Francis and the sacred right to land

In the first piece in this three-part series, drawing from Pope Francis’ addresses to the popular movements, we looked at the Catholic social teaching on land. The second “sacred right” that Pope Francis addressed in these talks was lodging, or housing. This is the subject of this second reflection.

The language of “home” has been a vital social theme during this pontificate, with Pope Francis making it a centerpiece of “Laudato Si’, on Care of Our Common Home.” Home is a resonant idea for Christians; it is the way that we think of heaven and of our destination at the end of a pilgrim life. Heaven as home is a biblical theme and a doctrinal one too. The idea, we might say, has a divine and analogical significance for us.

In the realm of social teaching, the notion of a physical home, lodging, housing or place of dwelling has both natural-ecological and social-ecological dimensions to it — and of course, these are connected meanings. In “Laudato Si'” the earth itself is described as “our common home,” a natural habitation given as gift for all, to meet the needs of all. This natural habitation is suffused with the presence of the Creator and God’s intention for our lives, well lived.

The pope’s encyclical has a way of helping us view our lives as deeply embedded in place, time and location — it returns us to a sense that we dwell in or inhabit places and times. Recognizing this is a crucial way of beginning to think about home and housing in the right kind of way.

As the language of the apostolic exhortation “Evangelii Gaudium” expressed it, we have a tendency in modernity to be better at thinking about ourselves as occupiers of space rather than of places and times. Pope Francis thinks we badly need to reclaim the latter.

The American Baptist theologian Willie James Jennings talks about modernity teaching us to “fly solo,” over land, time, flesh and place. Pope Francis’ writings echo this same insight and imply that this mentality of uprootedness in our cultures leaves us poorly equipped for recognizing why lodging is such a central spiritual and social question.

Therefore, for Pope Francis, our first lodging, to be thought about in terms of hospitality, rootedness, responsibility and gratitude, is the earth itself, which comes to us as gift. Just as Pope Francis’ teaching on land restrains us from a merely instrumental way of thinking, so does his teaching on lodging or dwelling.

Pope Francis is sharp in his criticisms of the absence of housing for some, the quality of housing available to so many of the world’s poorest, and the imbalance in the real possibilities of ownership. The pope is also critical of urban planning that seeks to break up neighborhoods of the poorest, where relationships of solidarity and support are strong, rather than seeking the participation of residents of such neighborhoods in redevelopment and improved housing plans (No. 152).

Pope Francis notes at length the connections between human dignity and housing, and the possibilities of family growth and adequate housing. Housing is how we ensure privacy, stability, hospitality and self-care are possible. All other forms of social participation are incumbent upon adequate housing.

Emilce Cuda, an Argentine theologian who has worked closely with Pope Francis and with the popular movements, argues that when Pope Francis appeals to the sacred right to lodging, or a “roof” (from his Spanish phrasing) this includes an appeal to the basics that enable the material sustenance of life, food, health, education. These are what enable living and dwelling at their most basic levels.

The Irish bishops’ conference took a leading role in issuing a pastoral letter “A Room in the Inn?” to explore the connections between human dignity, housing and homelessness.

Pope Francis has picked up this theme in his visits to shelters and in addresses he gave during his visit to the U.S. He argued that there is no moral justification in a world of abundant resources for anyone to live with the injustice of no or poor housing.

Cardinal Peter Turkson, then head of the Dicastery for Promoting Integral Human Development, spoke of a right to the “justice of housing.” Both have connected this theme to human displacement and the fate of the stateless and refugees. This is a theme that the Catholic social teaching tradition is only just beginning to really think through, and Pope Francis has been crucial to its growing focus.