Pope Francis and Vatican II: It's not a battleground, but the future - Catholic Courier 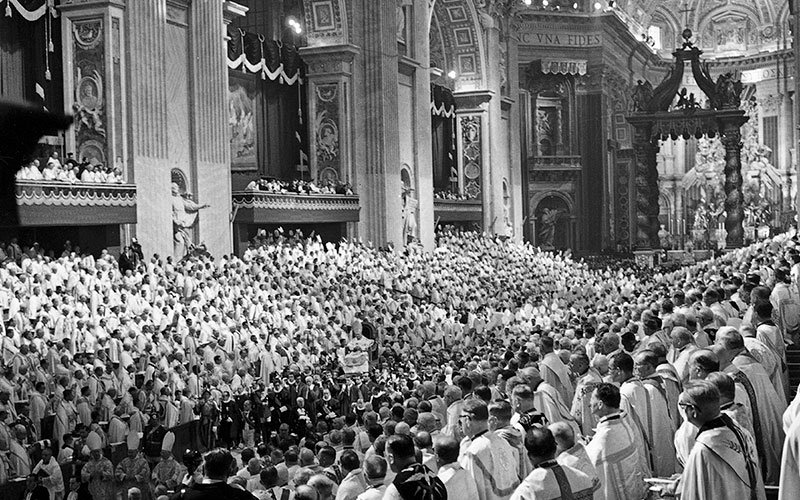 VATICAN CITY (CNS) — Pope Francis is the first pope to have been ordained to the priesthood after the Second Vatican Council.

Unlike his two predecessors, St. John Paul II and retired Pope Benedict XVI, Pope Francis was not present in Rome for any of the sessions of the council, which met from 1962 to 1965.

But for the Catholic Church in the modern world and its future health and holiness, Pope Francis is convinced that the Second Vatican Council holds the key.

Presenting the logo for the Holy Year 2025, Archbishop Rino Fisichella said the pope is asking Catholics worldwide to prepare for the next jubilee year by studying the council documents, especially its four constitutions, which focused on: the liturgy; the church as the people of God; Scripture; and the role of the church in the modern world.

Pope Francis seemed to kick off the study the next day by issuing “Desiderio Desideravi” (“I have earnestly desired”), an apostolic letter he described as a meditation on the liturgy and one that strongly affirmed the Vatican II reform of the Latin-rite Mass as inspired by the Holy Spirit.

“I do not see how it is possible to say that one recognizes the validity of the (Second Vatican) Council — though it amazes me that a Catholic might presume not to do so — and at the same time not accept the liturgical reform born out of ‘Sacrosanctum Concilium,’ a document that expresses the reality of the liturgy intimately joined to the vision of church so admirably described in ‘Lumen Gentium,'” the dogmatic constitution on the church, Pope Francis wrote in the letter, published June 29.

Meeting in May with the editors of Jesuit magazines and journals in Europe, the pope did not mince words when talking about the resistance of some bishops and priests to the teaching of the Second Vatican Council and its vision of the church.

“The council that some pastors remember best is that of Trent. What I’m saying is not nonsense,” he told the editors.

“Restorationism has come to gag the council,” he said, adding that “the number of groups of ‘restorers’ — for example, in the United States there are many – is significant.”

Pope Francis also noted something he has said many times before: “It takes a century for a council to take root. We still have 40 years to make it take root, then!”

Throughout the nine years of his pontificate, the pope has been trying to help the church make that progress.

In “The Joy of the Gospel,” the 2013 apostolic exhortation that laid out the vision for his pontificate, he described the council as calling for “ecclesial conversion” and an “openness to a constant self-renewal born of fidelity to Jesus Christ.”

The pope’s push to get Catholics familiar with the Second Vatican Council does not involve study alone; through the ongoing process of preparing for the Synod of Bishops in 2023, he wants them to experience it for themselves.

In 2015, marking the 50th anniversary of the restoration of the synods for the universal church, Pope Francis called them “one of the most precious legacies of the Second Vatican Council.”

Tying the council’s insistence on the dignity and responsibility of all the baptized for the church’s life and mission, he told cardinals and superiors of Roman Curia offices in December, “The synod wants to be an experience of feeling ourselves all members of a larger people, the holy and faithful people of God, and thus disciples who listen and, precisely by virtue of this listening, can also understand God’s will, which is always revealed in unpredictable ways.”

Pope Francis continually talks about making concrete the council’s vision of the church as the community where all the baptized are empowered to take their responsibility for going out to share the Gospel with the world, especially with those who are excluded or tossed aside by civil society.

In the “Joy of the Gospel,” he said one of the “pastoral consequences” of the council’s teaching was a “fitting sense of proportion” in church teaching and preaching.

“For example,” he wrote, “if in the course of the liturgical year a parish priest speaks about temperance 10 times but only mentions charity or justice two or three times, an imbalance results, and precisely those virtues which ought to be most present in preaching and catechesis are overlooked. The same thing happens when we speak more about law than about grace, more about the church than about Christ, more about the pope than about God’s word.”

In his famous interview with Jesuit Father Antonio Spadaro in August 2013, he said, “Vatican II was a re-reading of the Gospel in light of contemporary culture” and “produced a renewal movement that simply comes from the same Gospel. Its fruits are enormous.”

“The dynamic of reading the Gospel, actualizing its message for today — which was typical of Vatican II — is absolutely irreversible,” the pope said.

For Pope Francis, who entered the Jesuits in 1958 and was ordained a priest in 1969, the council and its renewal of the life and vision of the church were part and parcel of his formation for ministry.

“In the history of Latin America in which I was immersed, first as a young Jesuit student and then in the exercise of my ministry, we breathed an ecclesial climate that enthusiastically absorbed and made its own the theological, ecclesial and spiritual intuitions of the council and inculturated and implemented them,” he wrote in the preface to “Fraternity: Sign of the Times,” a book by Cardinal Michael Czerny and Father Christian Barone published in 2021.

“Quite simply,” he wrote, “the council had entered into our way of being Christians and of being church, and throughout my life, my intuitions, perceptions and spirituality were simply generated by the suggestions of the doctrine of Vatican II.”