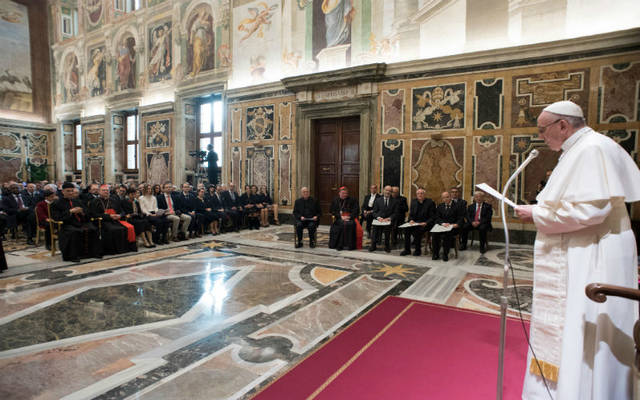 Pope Francis leads an audience with winners of the 2017 Ratzinger Prize at the Vatican Nov. 18. The prize is named for retired Pope Benedict XVI and honors those who make significant contributions to theology and culture.

VATICAN CITY — The theological work and papal teaching of retired Pope Benedict XVI “continue to be a living and precious heritage for the church,” Pope Francis said.

The pope met Nov. 18 with the winners of the 2017 Ratzinger Prize, named for the retired pope to honor those who make significant contributions to theology and culture.

The three winners had met the day before with Pope Benedict in his residence in the Vatican gardens.

Pope Francis told the group that Pope Benedict’s “prayer and his discreet and encouraging presence accompany us on our common journey.”

The Ratzinger Prize is awarded each year by the Vatican-based Joseph Ratzinger-Benedict XVI Foundation, and Pope Francis urged the foundation to pay tribute to the retired pope not only by promoting the study of his writings, but to continue the spirit of his work by “entering into new fields in which modern culture asks for dialogue with the faith.”

“The human spirit always has an urgent and vital need for this dialogue,” the pope said. And faith needs dialogue as well to ensure that it does not become abstract, but “incarnates in time.”

“Joseph Ratzinger continues to be a master and friendly interlocutor for all those who exercise the gift of reason to respond to the human vocation of searching for truth,” he said.

“Co-workers of the truth,” the motto the retired pope chose in 1977 as his episcopal motto, “expresses well the whole sense of his work and his ministry,” the pope said.

Pope Francis said he was happy the three winners for 2017 come from different Christian traditions and he was pleased to approve the expansion of the prize to include the arts because it “corresponds well to the vision of Benedict XVI, who so often spoke in a touching way about beauty as a privileged path for opening us up to transcendence and an encounter with God.”