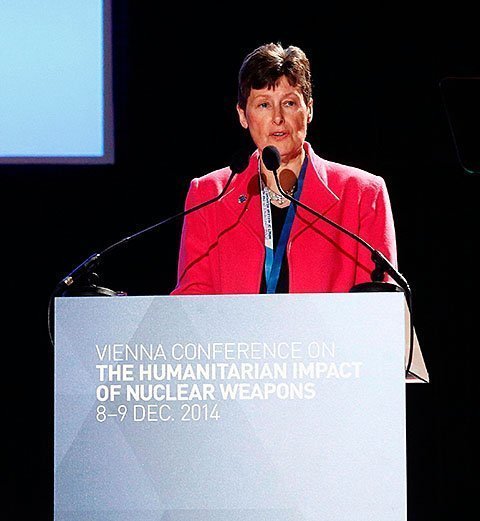 Angela Kane, the U.N. high representative for disarmament affairs, speaks at the Vienna Conference on the Humanitarian Impact of Nuclear Weapons Dec. 8. Pope Francis called on world leaders, activists and people of faith to pull together to rid the world of the threat of nuclear weapons.

VIENNA (CNS) — Pope Francis called on world leaders, activists and people of faith to pull together to rid the world of the threat of nuclear weapons.

Archbishop Silvano Tomasi, the Vatican’s permanent representative to U.N. agencies in Geneva, read the pope’s statement in Vienna Dec. 8 at the opening of Vienna Conference on the Humanitarian Impact of Nuclear Weapons.

In his message, Pope Francis restated the Vatican’s long-standing advocacy for the global elimination of nuclear weapons and said peace is not just a balance of power, "but true justice."

The pope’s statement said nuclear nations should move beyond the mere ideal of the abolition of atomic weapons stressed in The Treaty on the Non-Proliferation Of Nuclear Weapons and take the next steps toward meeting that objective.

"The humanitarian consequences are predictable and planetary," the pope said in the statement, read before representatives of more than 150 countries gathered for conference.

More attention should be given to the unnecessary suffering that would result from the use of nuclear weapons, the pope’s statement said. He encouraged open dialogue between nuclear and non-nuclear states, with the inclusion of religious communities and civil society.

The pope’s statement was one of several during the opening remarks of the two-day conference, in which experts have been dispatched to discuss the short- and long-term consequences of nuclear weapons explosions, especially in the areas of health, environment, climate, food security and infrastructure.

Possession of nuclear weapons does not provide safety or security, but increases the likelihood of accidents and mistrust among nations, said Angela Kane, the U.N. high representative for disarmament affairs.

A nuclear strike would cause devastating effects beyond the borders of the nation targeted for the attack, said Sebastian Kurz, Austria’s foreign minister.

"It would have regional and global consequences," Kurz told the audience. "No one would win, everyone would lose. It’s high time we move from words to action."

Scientific experts said nuclear strikes between two nations like the U.S. and Russia would initially kill thousands of civilians and would reduce targeted cities to rubble.

The same experts also said the long-term environmental impact of such an engagement would decrease global temperatures, halt agricultural production and potentially cause billions to die of starvation.

"The risk is high, the danger is real," said Peter Maurer, president of the International Committee of the Red Cross. "Let’s bring the era of nuclear weapons to an end."

He said no team on the planet could launch an adequate response if one or more nuclear bombs were detonated, either intentionally or by accident.

Not all was doom and gloom during the opening of the government-sponsored conference.

While there are currently 17,000 nuclear bombs worldwide in a high-alert status, experts told participants that figure is far less than the 70,000 weapons that were combat-ready at the end of the Cold War.

However, the 85 percent reduction in nuclear weapons has created a false sense of security among the masses, who see nuclear destruction as an abstract threat, Kurz said.

In his message, Pope Francis warned of such complacency and encouraged participants of the conference to remind the world of the risks of nations possessing any nuclear weapons.

"I’m convinced the desire for peace will bear fruit in concrete ways," the pope said in the statement, adding that it was his hope that "a world without nuclear weapons is possible."

Editor’s Note: CNS staffer Chaz Muth is part of a media delegation to Vienna; his trip was sponsored by the Nuclear Threat Initiative.