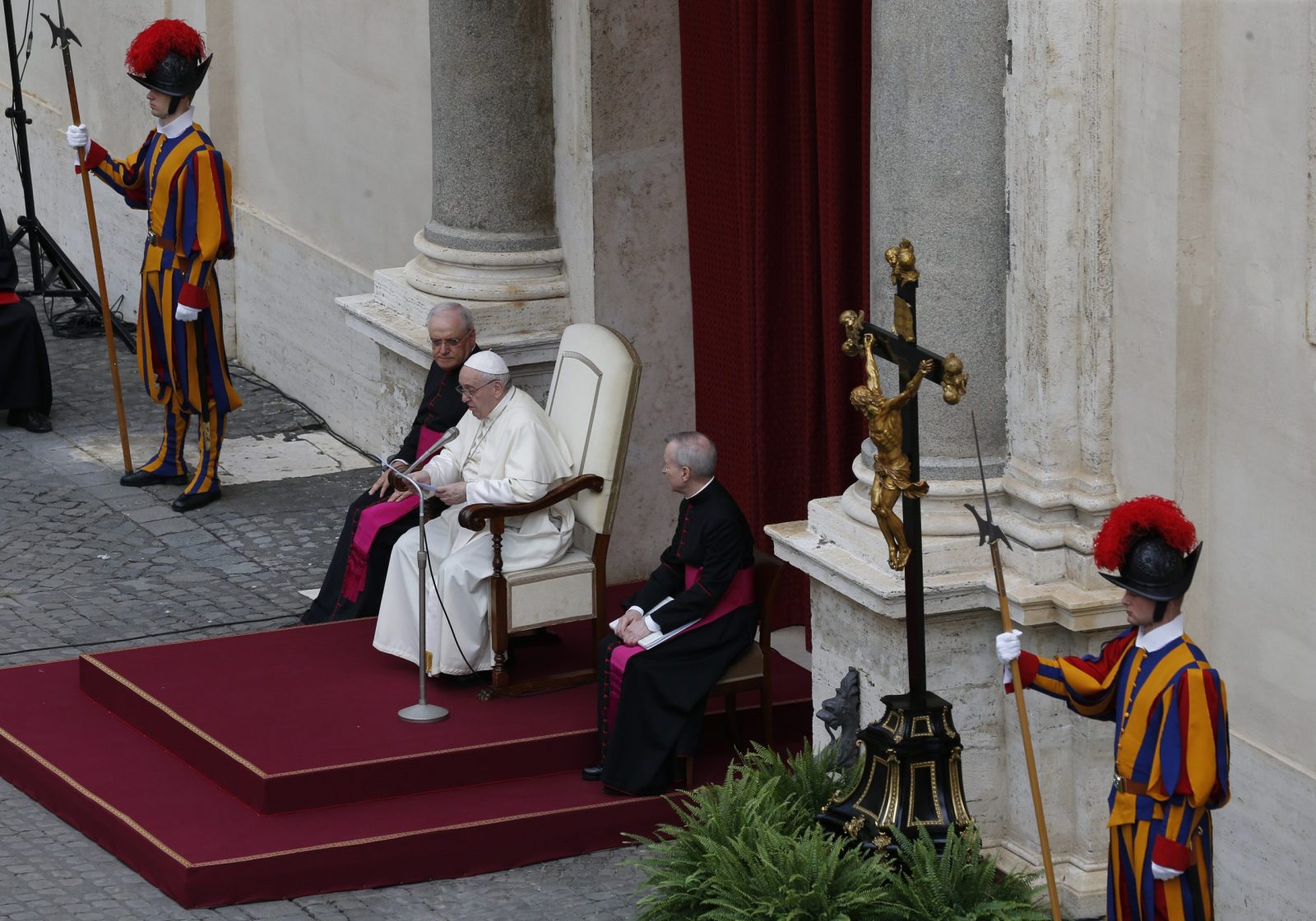 Pope Francis leads his general audience in the San Damaso courtyard at the Vatican Sept. 2, 2020. It was the pope's first public audience with pilgrims in six months. (CNS photo by Paul Haring)

VATICAN CITY — The pleasure of seeing other people face to face and not “screen to screen” as COVID-19 restrictions ease clearly demonstrates that people are social beings and need one another, Pope Francis said.

After six months of livestreamed general audiences, more than 600 people gathered in the San Damaso courtyard of the Apostolic Palace to see Pope Francis in person and listen to his audience talk about the virtue of solidarity.

“The current pandemic has highlighted our interdependence: we are all linked to each other for better or for worse,” he said. “Therefore, to come out of this crisis better than before, we must do so together, all of us, in solidarity. Together, not alone.”

“As a human family, we have our common origin in God; we dwell in a common home, the garden-planet where God placed us; and we have a common destination in Christ,” the pope said.

But when people forget that, he said, interdependence is ignored and inequality and marginalization increase, the social fabric weakens, and the environment deteriorates.

“However, this interdependence does not always transform into solidarity,” he said. “On the contrary, selfishness — individual, national and by power groups — and ideological rigidity increase structures of sin.”

Solidarity, on the other hand, is rooted in the truth that God created all human beings and created the earth as well, the pope said. Solidarity not only treats both with respect but acts to help when one is in peril.

“We build towers and skyscrapers, but we destroy communities,” he said. “We want to be lords of the earth, but we ruin biodiversity and the ecological balance.”

For Christians, he said, the source of true solidarity is the Holy Spirit.

At Pentecost, the Spirit descended upon the disciples and created a community united by faith, “united in diversity and in solidarity,” the pope said. “Diversity and solidarity joined in harmony. This is the path. A diversity with solidarity has the ‘antibodies’ necessary so that each person’s individuality — which is a unique and unrepeatable gift — does not get sick with individualism, selfishness.”

“In the midst of crises,” he said, “a solidarity guided by faith enables us to translate the love of God in our globalized culture, not by building towers or walls — and how many walls are being built today that divide, but then collapse — but by interweaving communities and sustaining processes of growth that are truly human and solid.”

Pilgrims and visitors who wanted to attend the audience could do so without tickets as long as they wore a face mask and had their temperatures checked by members of the Knights of Malta standing under the colonnade around St. Peter’s Square.

Father Edwin Abudho, a Kenyan studying at Rome’s Pontifical University of the Holy Cross, celebrated his release from the 14-day COVID-19 quarantine by attending the audience with nine other priests.

“It’s a lovely experience to listen to the pope,” he told Catholic News Service. “It’s very important for me as a Catholic and as a student of theology.”

Company of Jesus Sister Margarita, who helps run her order’s hostel in Rome for Czech pilgrims, said she and other staff members wanted to see the pope, but they also wanted to get a firsthand look at how the audience in the courtyard works so they can tell pilgrims once they start arriving again.

Oscar Watts, a 20-year-old from London, said he biked from Switzerland to Rome Aug. 13-31 and “I thought it would be very nice to see the pope.”