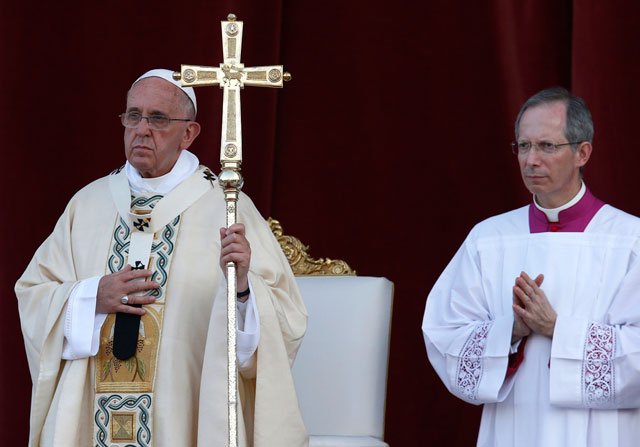 Pope Francis stands with his crosier outside the Basilica of St. John Lateran in Rome June 4 during the celebration of the feast of Corpus Christi.

ROME (CNS) — The Eucharist is the seal of God’s covenant, uniting Christians and giving them the strength to bring God’s love to others, even when faith carries a high price, Pope Francis said.

Celebrating the feast of the Body and Blood of Christ with an evening Mass outside Rome’s Basilica of St. John Lateran June 4, Pope Francis said the church and its members will never cease being in awe of the Eucharist.

As the sun began to set, the Mass was followed by a traditional Corpus Christi procession from St. John Lateran to the Basilica of St. Mary Major, one mile away.

Pope Francis asked the faithful as they walked through the city with the Eucharist to remember "our many brothers and sisters who do not have the freedom to express their faith in the Lord Jesus."

"Let us be united with them; let us sing with them, praise with them, adore with them," he said. "And, in our hearts, let us venerate those brothers and sisters who were asked to sacrifice their lives out of fidelity to Christ. May their blood, united to the Lord’s, be a pledge of peace and reconciliation for the whole world."

The Eucharist, he said, "sanctifies us, purifies us and unites us in a marvelous communion with God. In that way we learn that the Eucharist is not a prize for the good, but strength for the weak; for sinners it is pardon; it is the viaticum that helps us move forward, to walk."

In the main part of his homily, Pope Francis quoted from one of the texts in the Liturgy of the Hours for the feast day: "Eat this sacred food, so that your bond of unity with Christ may never be broken. Drink this sacred blood, the price he paid for you, so that you may never lose heart because of your sinfulness."

Division and losing heart are "a danger, a threat," he said, but the gift of Christ’s presence in his body and blood give Christians the strength to resist them.

But the Eucharist is "the bond of communion" and the constant sign of the love of Christ who died on the cross "so that we would remain united," he said.

"Christ, present among us under the sign of bread and wine, demands that power of love overcome every fracture and, at the same time, become communion with the poor, support for the weak and fraternal concern for those who struggle to bear the weight of daily life and are in danger of losing their faith," Pope Francis said.

Christians lose heart when they lose sight of their dignity as Christians, he said, and instead worship "the idolatries of our time: appearances, consumption and placing the ‘I’ at the center of everything."

Being competitive, thinking that arrogance is a charming personal quality or that you are never wrong are other symptoms, the pope said. "All of this devalues us, makes us mediocre, tepid, insipid Christians, pagans." As Christians, he said, we will always be "poor sinners, but the blood of Christ will free us from our sins and restore our dignity."

"Not by our own merits and with sincere humility, we can bring our brothers and sisters the love of our lord and savior," Pope Francis said. "We will be his eyes searching out Zacchaeus and Mary Magdalene; we will be his hands that help those sick in body and spirit; we will be his heart that loves those in need of mercy, reconciliation and understanding." ‘

As he did last year, Pope Francis celebrated the Mass and then rode in a car to St. Mary Major to meet the Corpus Christi procession as it arrived and to officiate at the Benediction of the Blessed Sacrament.

The Eucharist had been carried on a flatbed truck with two deacons kneeling alongside it. Thousands of Catholics — members of confraternities, dozens of cardinals and bishops, plus hundreds of sisters and priests — accompanied the truck, carrying candles as darkness fell.

The truck bore the Vatican license plate "SCV 1," the special plate usually reserved for the pope.