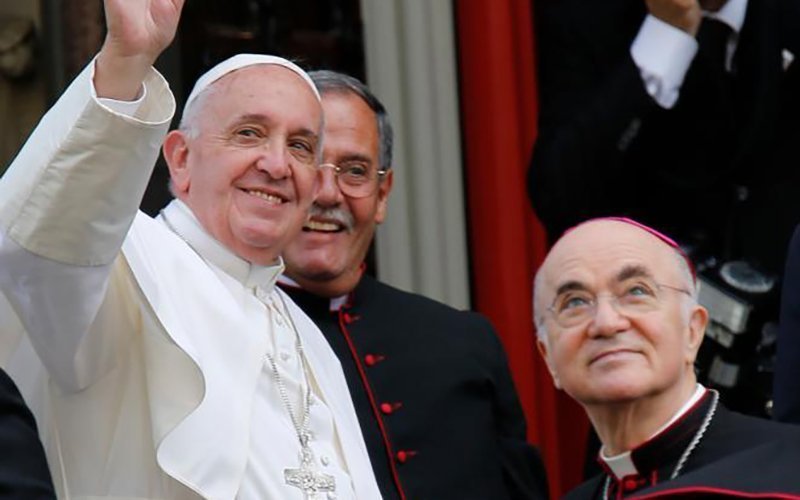 Pope Francis waves outside St. Patrick in the City Church in Washington, Sept. 24, 2015, while accompanied by Archbishop Carlo Maria Vigano, then the apostolic nuncio to the United States. (CNS photo by Bob Roller)

VATICAN CITY (CNS) — Nearly a year later, Pope Francis denied claims made by a former apostolic nuncio to the United States who accused him and other church officials of failing to act on accusations of abuse of conscience and power by former Cardinal Theodore E. McCarrick.

“I knew nothing, obviously, of McCarrick. Nothing, nothing. I said several times that I didn’t know, that I had no idea,” the pope said in an interview with Mexican journalist Valentina Alazraki published by Vatican News May 28. “You know that I didn’t know anything about McCarrick; otherwise, I would not have stayed quiet.”

In an open letter first published in August, Archbishop Carlo Maria Vigano, who served as nuncio to the United States from 2011 to 2016, claimed he told the pope of the allegations in 2013.

The pope, who was in Dublin for the World Meeting of Families at the time, refused to comment directly on the allegations and told reporters to “read that statement attentively and make your own judgment.”

The pope told Alazraki that response was “an act of faith” in people reading the document. “Maybe when a bit of time has passed, I’ll talk about it,” he had said on his return flight to Rome.

At the time, he said, he had not read Archbishop Vigano’s entire letter and decided to “trust in the honesty of journalists” and asked them to make their own conclusions.

Pope Francis said the reporting on inconsistencies in Archbishop Vigano’s testimony “was very good, it was better than me explaining to defend myself. (Journalists) judged with the proof they had in their hands.”

Another reason for remaining silent, he said, was to try to imitate the approach Jesus took on Good Friday, where in the face of “a climate of viciousness he closed his mouth.”

“The Lord taught us that path and I follow it,” the pope said.

“In front of a climate of viciousness, you cannot answer,” Pope Francis said. “And that letter was vicious as you later realized by the results, that it was — as some of you reported — paid for. I do not know (if that is true) but I look at the consequences.”