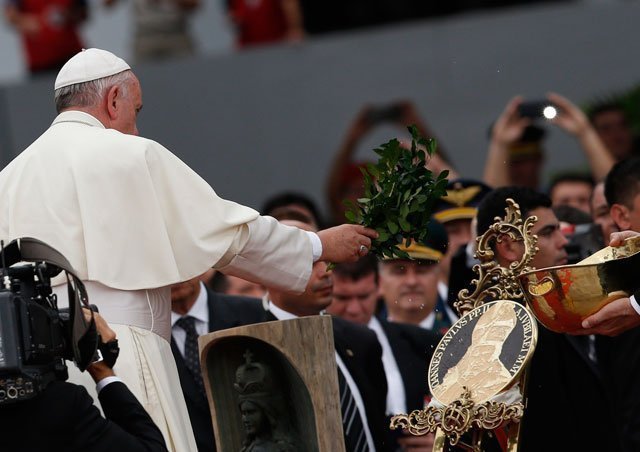 ASUNCION, Paraguay (CNS) — Arriving in Paraguay July 10, Pope Francis paid tribute to the historic visit to the country made in 1988 by St. John Paul II, a visit many people saw as contributing to the end of one of the world’s longest military dictatorships.

Welcomed at the Asuncion airport by President Horacio Cartes, who was elected in 2013 and has a son named Juan Pablo, Pope Francis made the sign of the cross, took a green branch, dipped it in water and blessed a plaque commemorating St. John Paul’s visit 27 years ago.

When the Polish pope made his trip to Paraguay, the president was Gen. Alfredo Stroessner, who had come to power in a military coup in 1954 and led the country until 1989. His strongly anti-communist rule was known for its harsh treatment of all political opposition and for torture. A military coup put an end to his rule.

In the midst of social strife and strong opposition to Stroessner’s rule, opposition that saw even priests jailed or expelled from the country, Pope John Paul told the general that the church cannot be confined to "its places of worship."

The Catholic Church, the pope had said, is committed to promoting freedom and honesty in public and private circles, defending life and favoring the rights of people.

St. John Paul used formal and polite language to be direct. He told the Paraguayan dictator, "Respect for human rights, as is well known, is not a question of political convenience, but rather it derives from the dignity of the person in virtue of his condition as a creature of God called to a transcendent destiny."

Although there was intermittent rain, Pope Francis’ arrival ceremony was held outdoors. With the familiar soundtrack from the film, "The Mission," playing in the background, the ceremony began with a two-minute video recounting St. John Paul’s visit at a dark time in Paraguay’s history.

The mood lightened quickly when young people, dressed in traditional indigenous and colonial costumes, danced for Pope Francis. The scene included three stars — youths dressed as statues of St. Rocco, Jesus and Mary — who were carried on platforms to the performance area as if they were the beloved statues that feature in feast day processions in many countries with a Latin tradition.