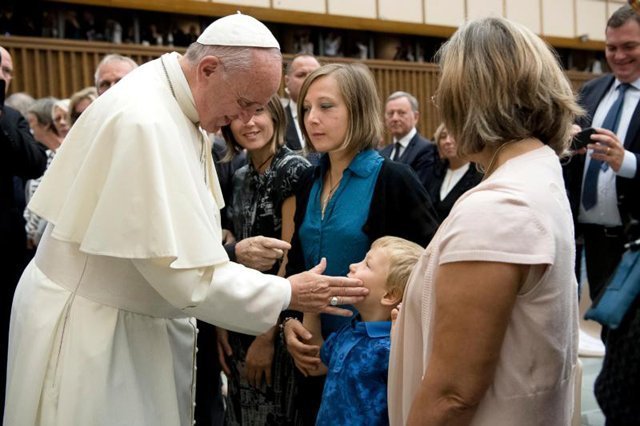 Pope Francis greets a child during a special audience with more than 80 victims of the attack in Nice, France, during a special audience Sept. 24 in Paul VI hall at the Vatican.
By Cindy Wooden
Catholic News Service
VATICAN CITY (CNS) — With some stoic and others sobbing, survivors and family members of the victims of the July terrorist attacks in Nice met Pope Francis during a special audience at the Vatican.
After expressing his condolences to the families of the 86 people who died and his prayers for the recovery of the more than 400 people who were injured in the attack July 14, Pope Francis greeted each and every one of the more than 800 people who traveled from France for the audience.
The group also included city and regional officials, first responders and members of the Alpes Maritimes Fraternite, a group of Christian, Muslim and Jewish leaders who have been working in Nice to promote mutual respect among different religious communities.
"To establish a sincere dialogue and fraternal relations among all people, particularly among those who confess belief in one merciful God, is an urgent priority that all leaders, both political and religious, must seek to promote and which each person is called to establish" with his or her neighbors, the pope said.
"When the temptation to turn in on oneself or to respond to hatred with hatred and violence with violence is great," he said, "an authentic conversion of heart is necessary."
"One can respond to the devil’s attacks only with the works of God, which are forgiveness, love and respect for one’s neighbor, even if he or she is different," the pope said.
After apologizing that his French was not good enough, Pope Francis said it was very moving to encounter so many people "who suffer in body and soul
because, on an evening of celebration, violence blindly struck you or your loved ones without regard for origin or religion."
"May the certainty of eternal life, a belief also shared by members of other religions, be of consolation to you," the pope said.
Copyright © 2022 Catholic News Service, Inc. All rights reserved. Linking is encouraged, but republishing or redistributing, including by framing or similar means, without the publisher's prior written permission is prohibited.