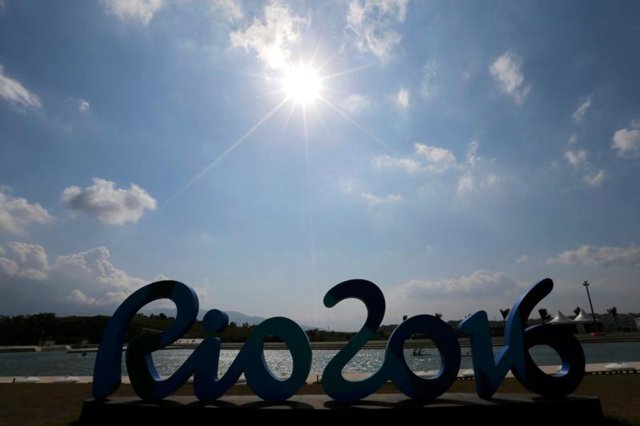 Canoe athletes preparing for the 2016 Summer Olympics paddle behind an Olympic sign Aug. 2 in Rio de Janeiro.
By Cindy Wooden
Catholic News Service
VATICAN CITY (CNS) — A more important prize than a gold medal is up for grabs at the Summer Olympics in Rio de Janeiro: a chance to experience solidarity and contribute to the realization that all people are members of one human family, Pope Francis said.
Speaking in Portuguese at his weekly general audience Aug. 3, Pope Francis offered special prayers and greetings to the people of Rio and to the athletes and fans who will gather in the Brazilian city for the games Aug. 5-21.
"In a world thirsting for peace, tolerance and reconciliation," he said, "I wish that the spirit of the Olympic Games would inspire all — participants and spectators — to fight ‘the good fight’ and end the race together, desiring as a prize not a medal, but something much more precious: the creation of a civilization where there reigns solidarity founded on the recognition that we are all members of one human family, no matter the differences of culture, skin color or religion."
Pope Francis’ remarks came one day after the release of the monthly video he makes for the Apostleship of Prayer, a Jesuit-entrusted organization that promotes worldwide prayers for the pope’s intentions.
In view of the Olympics, the pope’s prayer intention for August was: "That sports may be an opportunity for friendly encounters between peoples and may contribute to peace in the world."
The video — posted at www.thepopevideo.org — features a variety of athletes forcefully striking or throwing balls so hard that they break holes in a wall, symbol of the barriers between people.
"Sports make it possible to build a culture of encounter among everyone for a world of peace," the pope says in the video.
Copyright © 2022 Catholic News Service, Inc. All rights reserved. Linking is encouraged, but republishing or redistributing, including by framing or similar means, without the publisher's prior written permission is prohibited.