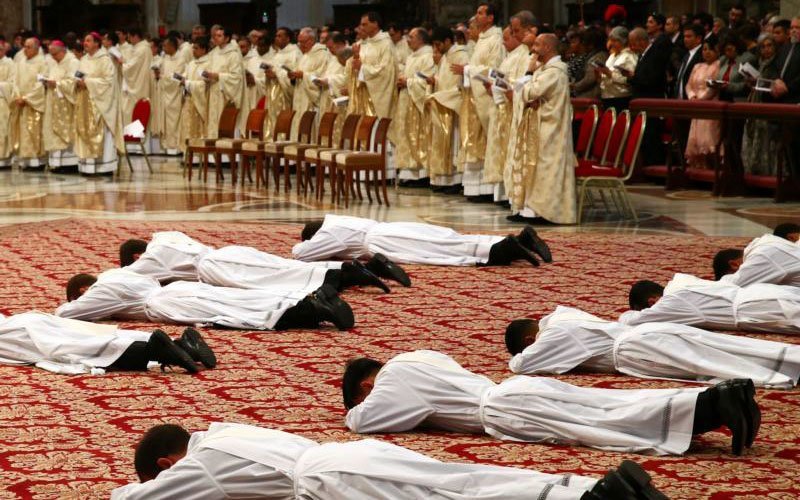 Priests lie prostrate during their ordination by Pope Francis during a Mass in St. Peter's Basilica at the Vatican April 22. The pope urged the new priests to be merciful with people who approach them, especially in the confessional. (CNS photo by Tony Gentile/Reuters)

VATICAN CITY (CNS) — Ordaining 16 men to the priesthood, Pope Francis urged them to be merciful with the people who approach them, especially in the confessional.

Marking the World Day of Prayer for Vocations April 22, the pope ordained 11 men for the Diocese of Rome, four for the Family of Disciples and one for the Sons of Divine Providence. The new priests ranged in age from 26 to 41 and came from Italy, Colombia, Croatia, El Salvador, Madagascar, Myanmar and Vietnam.

As is his custom for ordinations, Pope Francis used the homily prescribed by the Italian Missal but paused when he reached the description of how, through each sacrament, the new priests would minister to the people.

“With the sacrament of penance, you will remit sins in the name of Christ and the church,” he read from the text. “And here I’m going to stop to ask you, please, never tire of being merciful. Think of your sins, your wretchedness, which Jesus forgives. Be merciful.”

After the Mass, Pope Francis went up to the window of his studio in the Apostolic Palace to lead the midday recitation of the “Regina Coeli” prayer with an estimated 30,000 people gathered below in St. Peter’s Square.

He brought four of the new priests with him, inviting them to join him at the window to greet the crowd and give the people their blessing.

“We ask the Lord to send many good workers to labor in his field and also to increase vocations to consecrated life and to Christian marriage,” the pope told the crowd.

Pope Francis also commented on the day’s reading from the Gospel of John in which Jesus describes himself as the good shepherd.

“Jesus says to each person, ‘Your life is worth so much to me that in order to save it, I will give myself,'” the pope said. “It is precisely the offer of his life that makes him the good shepherd par excellence, the one who heals, the one who enables us to live a beautiful and fruitful life.”

Jesus tells his disciples that he knows his sheep and that his sheep know him. That relationship, the pope said, is the key to happiness and fulfillment.

The first step toward creating “a living relationship with Jesus,” he said, is “allowing ourselves to be known by him.”

“Don’t close yourself off; open yourself to the Lord,” the pope said. “He is attentive to each of us, he knows the depths of our hearts. He knows our virtues and our defects, the plans we have realized and the hopes that have been dashed.

“But he accepts us as we are, even with our sins, in order to heal us, forgive us and guide us with love so we can cross even the most arduous paths without losing the way,” Pope Francis said. “He accompanies us.”