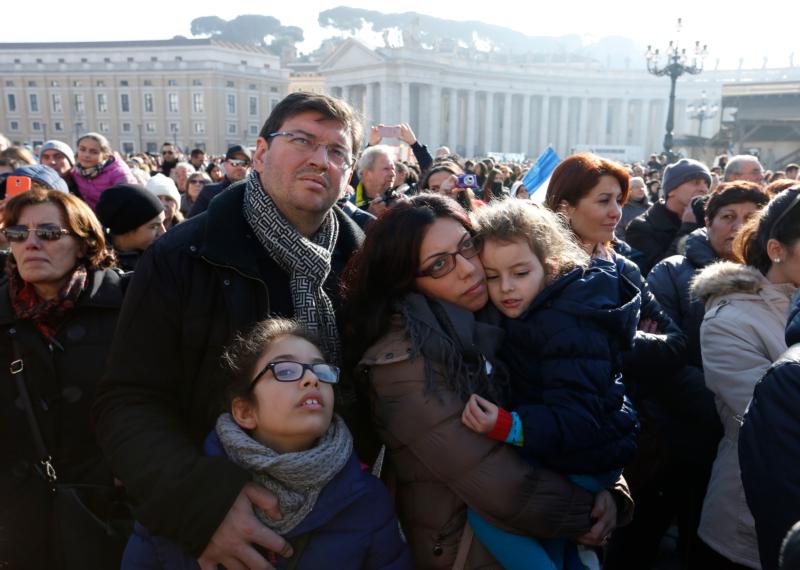 A family in St. Peter's Square attends Pope Francis' Angelus at the Vatican Dec. 20.
By Junno Arocho Esteves
Catholic News Service
VATICAN CITY (CNS) — Pope Francis endorsed a recent U.N. resolution on peace in Syria and expressed "deep appreciation" to the international community for reaching an agreement.
The U.N. Security Council approved a road map for a peace process between opposition forces and the government of President Bashar Assad. The Dec. 18 resolution calls for a cease-fire, the establishment of a unity government with a new constitution, and presidential elections within two years.
During his Angelus address Dec. 20, the pope called on the international community as well as those involved in the conflict to work toward bringing peace in the country, which has been in the grips of war for almost five years.
The conflict also has opened the door for terrorist groups, such as the so-called Islamic State, to take over parts of the country and neighboring Iraq to establish a caliphate while persecuting Christians and other religious minorities.
"I encourage everyone to continue, with a generous spirit of confident willingness, toward the cessation of violence and a negotiated settlement leading to peace," the pope said.
The pope also praised the establishment of a unity government in Libya, which has also been besieged by conflict since the ouster of longtime dictator Moammar Gadhafi. The Islamic State has also taken advantage of the civil war in the country in order to expands their attacks into Europe.
"I likewise think of nearby Libya, where the recent working agreement among the parties for a government of national unity invites hope for the future," Pope Francis said.
– – –
Follow Arocho on Twitter: @arochoju.
Copyright © 2022 Catholic News Service, Inc. All rights reserved. Linking is encouraged, but republishing or redistributing, including by framing or similar means, without the publisher's prior written permission is prohibited.