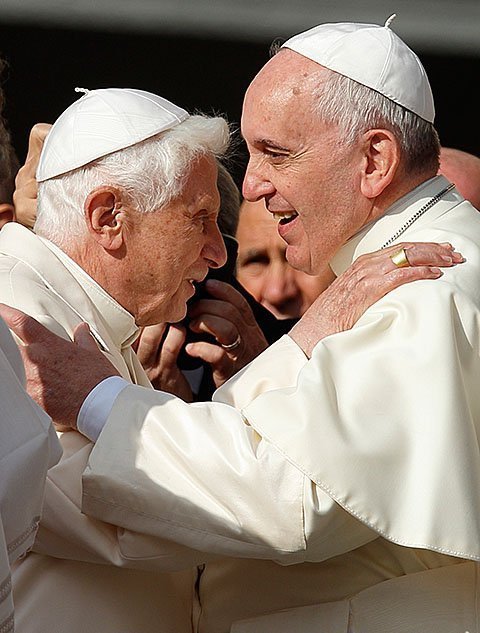 Pope Francis greets emeritus Pope Benedict XVI during an encounter for the elderly in St. Peter's Square at the Vatican Sept. 28.

VATICAN CITY (CNS) — Retired Pope Benedict XVI is a perfect example of how intellectual knowledge and scientific curiosity do not lead a person further from God, but can strengthen their love for God and for his human creatures, Pope Francis said.

"Benedict XVI was a great pope," he said: "Great for the power and penetration of his intellect, great for his considerable contribution to theology, great for his love for the church and for human beings, great for his virtues and his religiosity."

Pope Francis praised his predecessor Oct. 27 at a meeting of the Pontifical Academy of Sciences. The academicians invited Pope Francis to unveil a bronze bust of Pope Benedict at the academy’s headquarters in the Vatican Gardens.

The pope said he was pleased that the statue’s face and particularly its eyes captured the spirit, intelligence and love of Pope Benedict.

"This spirit, far from crumbling with the passing of time, will appear greater and more powerful from generation to generation," the pope predicted.

With his intellectual curiosity and his love for science, Pope Benedict especially enjoyed conversing with scientists at the Pontifical Academy, Pope Francis said.

"No one could ever say of him that study and science made him and his love for God and his neighbor wither. On the contrary, knowledge, wisdom and prayer enlarged his heart and his spirit," the pope said. "Let us thank God for the gift that he gave the church and the world with the existence and the pontificate of Pope Benedict."