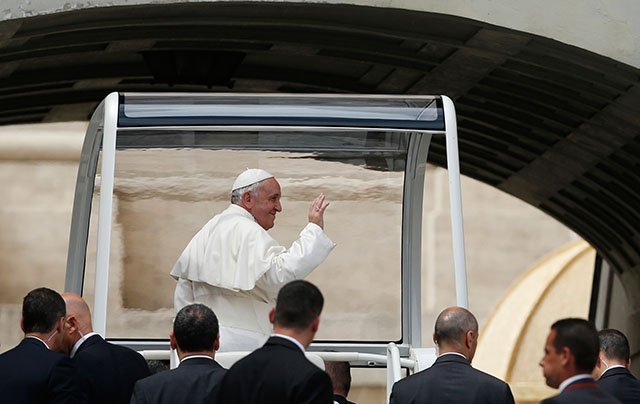 Pope Francis waves as he leaves a general audience in St. Peter's Square at the Vatican at the beginning of April. In an interview published June 12, the pope discussed a variety of topics, ranging from drawbacks of the world economic system to his personal safety.

He also condemned religious fundamentalism, defended the controversial record of Pope Pius XII and said he does not worry about his personal security because, "at my age I don’t have much to lose."

"We are in a world economic system that is not good," Pope Francis said. "A system that in order to survive must make war, as great empires have always done. But since you cannot have a Third World War, you have regional wars. And what does this mean? That arms are made and sold, and in this way the idolatrous economies, the great world economies that sacrifice man at the feet of the idol of money, obviously keep their balance sheets in the black."

Yet the pope reiterated one of his signature themes, that globalization’s failings are not only material but cultural, since it "cancels differences." He called for an economic system that preserves each person’s "particularity, richness, identity."

The pope also addressed the question of religiously inspired violence, noting that Christians had committed such violence in the past, for example during the 17th-century Thirty Years’ War.

The interview with correspondent Henrique Cymerman was conducted June 9, the day after Pope Francis presided over an "invocation for peace" at the Vatican with Israeli President Shimon Peres and Palestinian President Mahmoud Abbas.

The pope said that event took place in spite of skepticism from his own subordinates.

"It was not easy," the pope said. "Here in the Vatican, 99 percent said it would not happen and afterward the 1 percent grew."

Pope Francis said Ecumenical Patriarch Bartholomew’s decision to attend the invocation was a "risky move" since it left him open to reproaches from other Orthodox Christians, "but he had to extend this gesture of humility."

The pope also said opening Vatican archives relating to the Holocaust "will shed much light" on that subject, particularly the record of Pope Pius, who critics argue did not say or do all he could to oppose the Nazi genocide.

"They have dumped everything on poor Pius XII. But you have to remember that once he was seen as the great defender of the Jews," he said. "I am not saying that Pius XII did not make mistakes — I myself make a lot — but you have to interpret his role in the context of the time. Was it better, for example, that he not speak in order to avoid the killing of more Jews, or that he speak?"

Pope Francis voiced irritation at what he characterized as a double standard for judging the wartime pope: "Sometimes I get a slight case of existential hives when I see that everybody has it out for the church and Pius XII, and they forget the great powers," who failed to bomb the train lines leading to the Nazi death camps.

He characterized anti-Semitism as generally a phenomenon of the political right rather than the left, though not as a "strict rule."

"I don’t have any personal agenda that I carried in under my arm, simply because I never thought they were going to leave me here, in the Vatican," he said. "What I am doing is carrying out" the recommendations made by cardinals prior to the March 2013 conclave. Among those recommendations, the pope said, was greater consultation with outside advisers, which prompted his establishment of an international, eight-member Council of Cardinals.

Asked how he would like history to remember him, the pope said: "’He was a good guy, he did what he could, he was not so bad.’ I would be happy with that."

Admitting he still acts like a parish priest in some ways, for instance by turning off lights to save money, the famously informal Pope Francis insisted he takes his august role seriously.

"One shouldn’t play at being a papal parish priest. It would be immature," he said. "When a chief of state comes, I have to receive him with the dignity and protocol he deserves. It’s true that I have my problems with protocol, but one has to respect it."

The pope acknowledged that his accessibility to crowds, such as during his 2013 visit to Brazil, has left him vulnerable to attacks, but said his safety "is in God’s hands."

"I cannot greet a nation and tell it that I love it from inside a sardine can, even one made of glass. For me that is a wall," he said. "It’s true that something can happen to me, but let’s be realistic, at my age I don’t have much to lose."

Asked about the World Cup, which opened in Brazil June 12, the soccer-loving pope said with a laugh that he had promised Brazilians his neutrality, because of their traditional rivalry with his native Argentina.