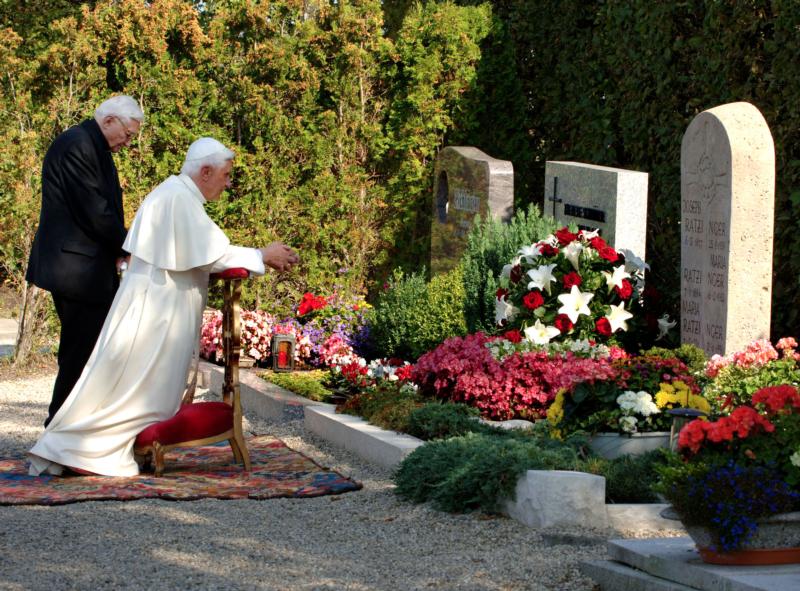 Msgr. Georg Ratzinger and his brother, now-retired Pope Benedict XVI, are seen in 2006 praying at their parents' grave in Pentling, Germany. (CNS photo by Wolfgang Radtke/KNA)

The monsignor, a musician and the retired pope’s elder brother, died in Regensburg, Germany, July 1 at the age of 96.

In a letter dated July 2, Pope Francis told his predecessor he was praying for his brother, hoping he would be rewarded in heaven for being among the “faithful servants of the Gospel.”

“And I am also praying for you, Your Holiness,” asking that God and the Blessed Virgin sustain him with “Christian hope and tender divine consolation.”

Pope Francis said he was touched by the retired pope’s kindness in “communicating to me first the news of the death of your beloved brother.” He reiterated his deepest condolences and “spiritual closeness in this time of sorrow.”

The pope ended his letter expressing his “filial and fraternal” feelings and said they were “always united in the adherence to the risen Christ, source of hope and peace.”

Msgr. Ratzinger had been hospitalized for a while, and Pope Benedict, 93, flew to Regensburg June 18 to be with his ailing brother for a few days.