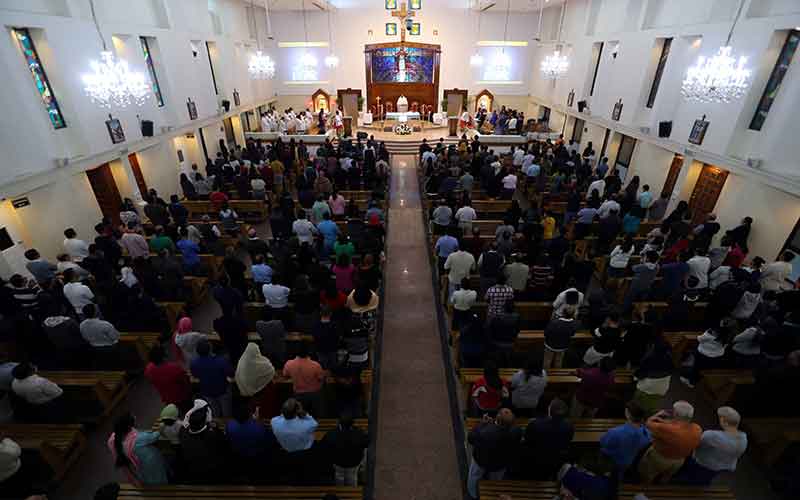 The trip would make him the first pope to visit the archipelago nation in the Persian Gulf.

“Accepting the invitation of the civil and ecclesial authorities, Pope Francis will make the announced apostolic journey,” visiting the capital of Manama and the city of Awali, said Matteo Bruni, director of the Vatican press office, in a written statement Sept. 28.

The focus of the visit will be the “Bahrain Forum for Dialogue: East and West for Human Coexistence.” Details of the trip were to be published later.

The new Our Lady of Arabia Cathedral was consecrated in December in Awali, which lies 16 miles south of Manama. It is now the largest cathedral in the Persian Gulf region. Previously, Bahrain only had one church in the capital, Manama, and a chapel in the suburbs to serve the country’s more than 90,000 Catholics.

Bahrain, a tiny, predominantly Muslim, island nation — smaller in area than London — and a key U.S. ally in the Persian Gulf, built the new church in response to the Gulf region’s increasing Catholic population, now estimated at 2.5 million. The cathedral seats 2,300 worshippers and serves the Apostolic Vicariate of Northern Arabia, which includes Bahrain, Kuwait, Qatar and formally, Saudi Arabia.

Catholics in Bahrain hail mainly from the Philippines, India and Sri Lanka. South Americans, Europeans and Arabs from the Levant region account for the rest of the island’s Christian population.

Father Saji Thomas, cathedral project leader and parish priest, told reporters in December that the cathedral was “a model of religious harmony, a sign of the tolerance of the kingdom of Bahrain and a great example of peaceful coexistence to the world.” The land was donated by Bahrain’s King Hamad bin Isa Al Khalifa nine years ago.

The king had invited Pope Francis to visit, underlining the importance placed on interfaith dialogue and understanding among different cultures and civilizations. The king also endorsed the Document on Human Fraternity for World Peace and Living Together, signed in Abu Dhabi Feb. 4, 2019, by Pope Francis and Sheikh Ahmad el-Tayeb, grand imam of Al-Azhar in Egypt.

Tags: Pope Francis
Copyright © 2022 Catholic Courier, Inc. All rights reserved. Linking is encouraged, but republishing or redistributing, including by framing or similar means, without the publisher's prior written permission is prohibited.