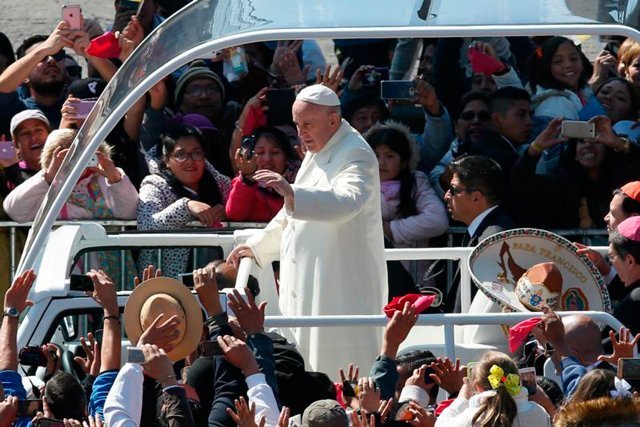 Pope Francis greets the crowd gathered in Mexico City's main square as Pope Francis arrives for a meeting with the nation's bishops in the cathedral Feb. 13.

MEXICO CITY (CNS) — Pope Francis demanded forceful denunciations of drug violence in Mexico from the country’s bishops, who have preferred timid pronouncements instead of speaking prophetically on a tragedy that has claimed more than 100,000 lives over the past 10 years and left an another 25,000 Mexicans missing.

Speaking Feb. 13 to an audience of bishops in Mexico City’s Metropolitan Cathedral, Pope Francis urged them to confront the scourge of drug cartels and organized crime by raising their voices, developing pastoral plans, and "drawing in and embracing the fringes of human existence in the ravaged areas of our cities."

"I urge you not to underestimate the moral and anti-social challenge, which the drug trade represents for young people and Mexican society as a whole," Pope Francis said. "The magnitude of this phenomenon … and the gravity of the violence … do not allow us as pastors of the church to hide behind anodyne denunciations."

The pope spoke to the Mexican bishops for more than 40 minutes, delivering a tough talk on matters the pope plans to highlight in his six-day Mexican trip, including violence, migrants and indigenous issues. In off-the-cuff remarks, he warned of "the temptation of aloofness and clericalism" for bishops, called for clerical transparency and asked for unity in the Mexican bishops’ conference, which has pursued closer ties with political leaders in recent years, while speaking softly — if at all — on uncomfortable issues such as corruption.

Pope Francis hit hardest on the drug issue, something retired Pope Benedict XVI said nothing about in his 2012 trip to Mexico. It’s an issue that has vexed Mexico and the Catholic Church over the past decade as a crackdown on drug cartels and organized crime has caused violence to rise, along with offenses such as extortion and kidnap. Many of those victims and victimizers were baptized Catholics.

The violence has claimed the lives more than a dozen priests over the past five years, while some dioceses have been accused to collecting "narcolimosnas" or "drug alms," and drug bosses — who often consider themselves proper Catholics — construct and fix parishes and sponsor patron saint feast days.

Pope Francis urged "prophetic courage" and implementing a pastoral approach of going to the peripheries, working with families and building bridges with parish communities, schools and the authorities, saying that only then "will people finally escape the raging waters that drown so many, either victims of the drug trade or those who stand before God with their hands drenched in blood, though with pockets filled with sordid money and their consciences deadened."

Pope Francis also alluded to the folkloric Santa Muerte, a skeletal pseudo-saint attracting hordes of followers in Mexico and Latin America, including many in the illegal drug trade.

"I am particularly concerned about those many persons who, seduced by the empty power of the world, praise illusions and embrace their macabre symbols to commercialize death in exchange for money which, in the end, ‘moth and rust consume,’" he said.

The rise of Santa Muerte worship over the past 15 years has alarmed the Mexican church and drawn Vatican condemnations, said Andrew Chesnut, religious studies professor at Virginia Commonwealth University, who has studied the pseudo-saint and estimates it now has 10 million followers in Mexico and abroad.

"It’s the chief concern of the Mexican church in terms of religious rivals," he said. "A week doesn’t go by in which some Mexican bishop or priest denounces it as satanic."

Still, Pope Francis praised popular piety, common in Mexico, where the faithful adore the saints and participate in pilgrimages, while ignoring the sacramental part of the church.

"I invite you to give yourselves tirelessly and fearlessly to the task of evangelizing and deepening the faith by means of a mystagogical catechesis that treasures the popular religiosity of people," Pope Francis said. "Our times require pastoral attention to persons and groups who hope to encounter the living Jesus."

He also lauded the church for its work with the many mostly Central American migrants transiting the country on trips that expose them to crime such as extortion, robbery and rape.

"There are millions of sons and daughters of the church who today live in the diaspora or who are in transit, journeying to the North in search of new opportunities," he said, calling migration, "the challenge of our age."

Pope Francis plans to celebrate Mass a stone’s throw from the U.S. border in Ciudad Juarez Feb. 17, when he is expected to expand on the migrant issue.

The pope travels to Chiapas at the other end of the country Feb. 15 for a Mass with Mexico’s indigenous peoples, who have fallen away from the church in droves. He urged the bishops to build a church more inclusive for indigenous peoples, who often live in impoverished conditions and in communities where Spanish is seldom spoken.

"I ask you to show singular tenderness in the way you regard indigenous peoples and their fascinating but not infrequently decimated cultures," Pope Francis said.

"Mexico needs its American-Indian roots so as not to remain an unresolved enigma. The indigenous people of Mexico still await true recognition of the richness of their contribution and the fruitfulness of their presence."

Pope Francis expressed his admiration for Our Lady of Guadalupe, who "teaches us that the only power capable of conquering the hearts of men and women is the tenderness of God."

He also told the bishops, "We do not need ‘princes,’ but rather a community of the Lord’s witnesses.

"Do not allow yourselves to be corrupted by trivial materialism or by the seductive illusion of underhanded agreements," he added in an allusion to suggestions that bishops sometimes smooth things out behind closed doors with corrupt officials and even criminals, instead of acting publicly. "Do not place your faith in the ‘chariots and horses’ of today’s pharaohs, for our strength is in the pillar of fire that divides the sea in two, without much fanfare."

He ended with a call for unity, departing from his prepared comments to do so.

"If you have to fight, then fight; if you have to say things, say them but like men, face-to-face, like men of God, who can pray together, who can discern together, and if you argue to ask for forgiveness," he said. "But always maintain the unity of the episcopal body."

Church observers said the pope’s message was unprecedented for Mexico, where the bishops’ conference has become quite conservative over the past quarter-century as the church and government restored relations. In some Catholic circles, critical voices on issues such as human right have been considered an impediment to that process.

"Francis is saying something along the lines of ‘I am aware of the differences among you,’" said Rodolfo Soriano Nunez, a sociologist and church observer in Mexico City. "There are lots of ‘sects’ within the Mexican bishops, groups that fight bitterly with each other while trying to offer themselves as the most reliable partners to the government."