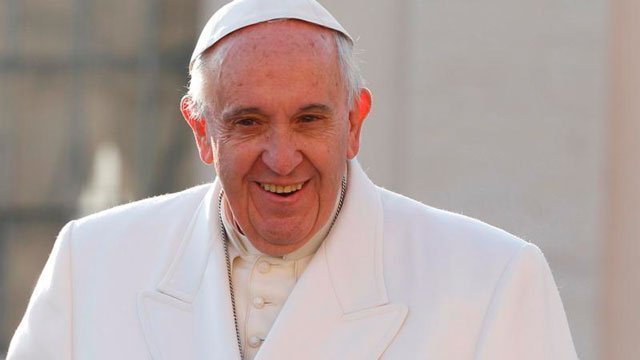 Pope Francis smiles as he arrives to lead his general audience in St. Peter's Square at the Vatican Dec. 16. The pope won the German 2016 Charlemagne Prize for European unification.
By Junno Arocho Esteves
Catholic News Service
VATICAN CITY (CNS) — Pope Francis was selected to be the 2016 recipient of Germany’s Charlemagne Prize for his commitment in promoting European unity.
The announcement was made Dec. 23 in Aachen, Germany by the prize’s executive committee. Citing his address to the European Parliament in 2014, the committee commended the pope’s message of "peace and understanding" as well as "compassion, tolerance, solidarity and the integrity of creation throughout his pontificate."
"In a time when the European Union is facing the greatest challenge of the 21st century, it is the pope ‘from the end of the world’ who orients millions of
Europeans to what the European Union brings together at its core: a valid system of values, respect for human dignity and civil liberties, the uniqueness of human beings whatever their ethnic, religious or cultural background and respect for our natural resources," the committee’s statement said.
Jesuit Father Federico Lombardi, Vatican spokesman, told journalists shortly after the announcement that the pope accepted the award as "a sign of encouragement for peace in Europe and the world."
The Charlemagne Prize, named after the first Holy Roman Emperor, is "given to public figures or bodies ‘distinguished by their outstanding work toward European unity or cooperation between its states.’"
Pope Francis is the second pontiff to receive the prestigious award following St. John Paul II, who received an "extraordinary" version of the prize in 2004. Past recipients include former British Prime Minister Winston  Churchill, American diplomat Henry Kissinger, and former U.S. President Bill Clinton.
"It is interesting the fact that the first non-European pope of this era receives a great European award, which means that he is a person who is able to understand Europe’s role in the history of making peace in today’s world from a global perspective," Father Lombardi said.
The Vatican spokesman also confirmed that Pope Francis will not be traveling to Germany next year to receive the award, but will be presented with the Charlemagne Prize by a delegation in Rome.
Copyright © 2023 Catholic News Service, Inc. All rights reserved. Linking is encouraged, but republishing or redistributing, including by framing or similar means, without the publisher's prior written permission is prohibited.