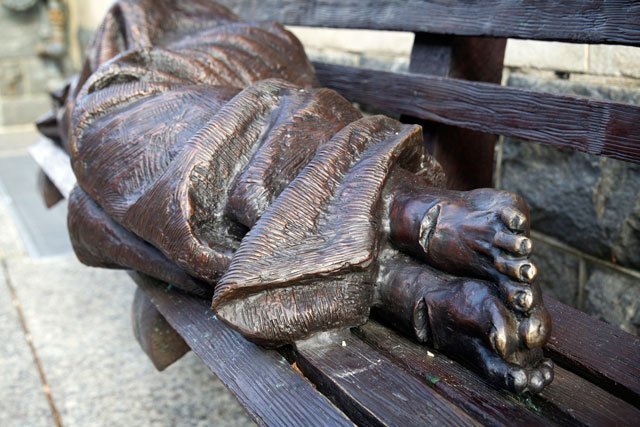 "Homeless Jesus" is pictured in this July 29 photo of the seven-foot-long bronze sculpture that sits in front of a downtown Washington building occupied by Catholic Charities of the Archdiocese of Washington. Pope Francis is expected to pass by the statue Sept. 24 during the Washington-leg of his U.S. visit.
By Chaz Muth
Catholic News Service
WASHINGTON — When Pope Francis approaches the Catholic Charities building in downtown Washington during his U.S. visit in September, he will encounter a "homeless person" covered in a blanket laying on a park bench.
The scene actually is a sculpture. And it’s not a work of art depicting any homeless person; it’s the bronze image of "Homeless Jesus."
"I hope Pope Francis blesses our ‘Homeless Jesus’ when he’s here," said Roland Woody, a Washington resident who was homeless until earlier this year.
"It’s kind of a symbol of hope for the homeless in D.C. If the pope blesses it, it will be even more special."
If the pope does bless the 7-foot-long statue, it will be the second one of its kind that he’ll have done that for.
Pope Francis blessed a smaller version of the "Homeless Jesus" sculpture during a late November, 2013, general audience at the Vatican in front of thousands of pilgrims.
Afterward, the pope told the sculptor, Timothy Schmaltz of Toronto, that he thought it was a "beautiful piece of art" and a wonderful representation of Jesus.
Schmaltz also created the "Homeless Jesus" statue in Washington, as well as similar sculptures in place in Toronto and several U.S. cities that include Denver, Phoenix and Chicago.
The arrival of "Homeless Jesus" in Washington came last winter after  Washington Cardinal Donald W. Wuerl witnessed the pope’s 2013 blessing of the smaller such statue, said Msgr. John Enzler, president and CEO of Catholic Charities of the Washington Archdiocese.
"It’s deceiving when you first look at it, because it looks like a homeless person wrapped in a blanket laying on a park bench," Msgr. Enzler told Catholic News Service during a recent Wednesday evening Catholic Charities-sponsored dinner for the homeless, held just a few steps from the statue.
"When you get up closer you realize it’s a sculpture," he said.
On more than one occasion, a homeless person has approached the priest and told him they could tell it was a statue of Jesus, because of the holes in the feet.
"They recognize it right away," Msgr. Enzler said. "It’s very special."
Such reaction is what Schmaltz envisioned when he began working on his first "Homeless Jesus" sculpture in 2011.
Viewers are forced to take a second look at the sculpture of a human wrapped in a blanket, face covered, with only the feet exposed, to recognize that it’s actually depicting Jesus, Schmaltz said.
"I can imagine some people walking on a city street, walking by thinking it’s another homeless person, and then they’ll realize it’s actually a representation of Jesus," he said in 2013. "They will have that moment of reflection."
Msgr. Enzler said Washington’s "Homeless Jesus" has inspired some to have a more compassionate view of the homeless and has provided the poor
with a little dignity.
"People who are homeless here say, ‘That’s our monument, that’s our Vietnam Memorial. That’s our Lincoln Memorial. That’s our place,’" he said.
"They love it. They’ll come by and they’ll touch it. They’ll say a prayer by it."
– – –
A video to accompany this story can be found at https://youtu.be/sLEixRCpYJM
Copyright © 2023 Catholic News Service, Inc. All rights reserved. Linking is encouraged, but republishing or redistributing, including by framing or similar means, without the publisher's prior written permission is prohibited.