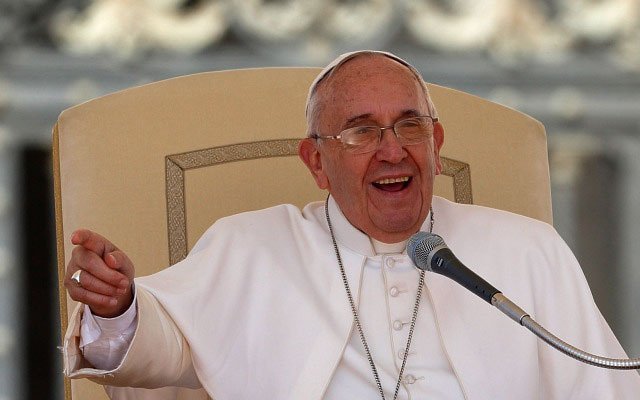 VATICAN CITY (CNS) — Everyone would do well to reflect on their "final farewell" from earthly life and on whether they are prepared to entrust themselves and all they will leave behind to God, said Pope Francis.

During a morning Mass at the Domus Sanctae Marthae May 19, the pope reflected on the day’s readings in which Jesus, after speaking to his disciples of his imminent departure for the Father, prays "the hour has come" (Jn 17:1-11a), and in which St. Paul gathers with the elders of Ephesus before leaving for Jerusalem (Acts 20:17-27).

Every life involves many leave-takings, both great and small, the pope said, and some involve "many tears" and "much suffering."

Drawing on current events, the pope recalled the "poor Rohingya of Myanmar" — an estimated 8,000 members of the mostly Muslim ethnic group have been adrift at sea, refused asylum by several countries — as well as the Christians and Yezidis who are being persecuted in Iraq.

"When leaving their homeland to escape persecution, they did not know what would happen to them," the pope said, speaking of the Rohingya people. After having been on a boat for months, "they arrive in a city where they are given water, food, and are told, ‘Go away’. It is a leave-taking," the pope said.

"Incidentally, today there is great existential leave-taking," he continued. "Think of the departure of the Christians and of the Yezidis, who think they will never return to their land because they have been forced from their homes."

The pope then spoke of the "final leave-taking, which everyone will face, when the Lord calls us to the other side."

The great leave-takings in life, including the final farewell, "are not departures of the type ‘see you soon,’ ‘later’ or ‘until we meet again,’ when a person knows he or she will return," he said. "They are departures where we do not know when and how we will return."

The theme of leave-taking is also present in art, he continued, recalling a song of the Italian Alpine corps about a captain saying farewell to his troops.

"Do I think of my final farewell, of the moment when I must say not ‘see you soon,’ ‘later,’ ‘until we meet again,’ but ‘farewell,’" the pope asked.

The day’s Scripture readings speak of farewell, he said, and of Paul and Jesus entrusting their disciples to God’s care.

"To entrust to the Father, to entrust to God: this is the origin of the word ‘adieu,’" he said. "We say ‘adieu’ only in the great leave-takings in life, whether in life or the final one."

The pope encouraged meditation on Jesus and Paul’s farewells in the day’s readings and reflection on one’s own eventual final farewell.

"It will do us good," he added. "Who will be the person who will close my eyes? What am I leaving behind? What did I do?

"It would do me well to imagine myself in that moment. When it will be, no one knows, but the moment will come when ‘later,’ ‘see you soon,’ ‘see you tomorrow,’ ‘until we meet again’ will become ‘farewell,’" he said.

"Am I prepared to entrust my loved ones to God? To entrust myself to God?" he continued.

He concluded invoking the risen Christ to send the Holy Spirit, so that "we may learn" to say the final adieu "with full strength."