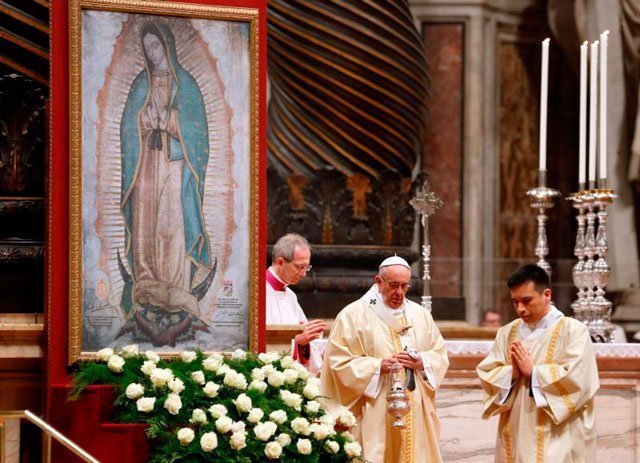 Pope Francis uses incense to venerate an image of Our Lady of Guadalupe during Mass marking the feast of Our Lady of Guadalupe in St. Peter's Basilica at the Vatican Dec. 12.
By Junno Arocho Esteves
Catholic News Service
VATICAN CITY (CNS) –- On the feast of Our Lady of Guadalupe, Pope Francis announced that he would travel to the Marian shrine in Mexico City and pray to Mary so that Christian communities "may become oases and rivers of mercy."
"To ask her this, in a strong way, I will travel to venerate her at her shrine on Feb.13. There, I will ask this for all of America, of whom she is especially a mother," the pope said.
The pope made the announcement during a Dec. 12 Mass in St. Peter’s Basilica honoring Our Lady of Guadalupe, who appeared to St. Juan Diego in 1531.
In his homily, the pope said that God’s merciful love is his "most surprising attribute" and is not only manifested through Mary but also directed toward the church and every person. God, he said "loves us with a free love, without limits, expecting nothing in return."
The pope said that no sin could cancel out God’s mercy but only shine forth his love with greater strength. "No matter how great or serious the sins of the world may be, the Spirit, who renews the face of the earth, makes possible the miracle of a more human life, full of joy and hope," he said.
Recalling Mary’s words to St. Juan Diego, the pope said the presence of the Lord and his mother is the  source of peace and joy even in the midst of suffering.
Mary, he continued, became the "mother of mercy" after having received in her womb "the very source of that mercy: Jesus Christ." Entrusting the sufferings and joys of "the whole American continent" to her, Pope Francis prayed that Mary may "sow merciful love in the hearts of people and families" during the jubilee year.
"I beseech her to guide the footsteps of the American people, a pilgrim people who look for the mother of mercy, and I only ask her one thing: to show us her son Jesus," the pope said.
– – –
Follow Arocho on Twitter: @arochoju
Copyright © 2023 Catholic News Service, Inc. All rights reserved. Linking is encouraged, but republishing or redistributing, including by framing or similar means, without the publisher's prior written permission is prohibited.