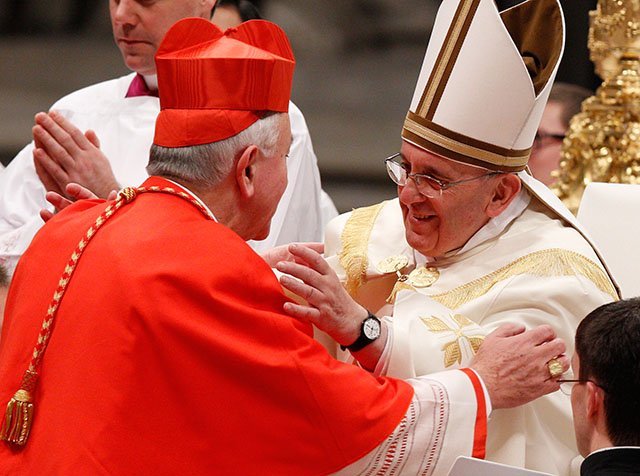 VATICAN CITY (CNS) — On a feast day commemorating the authority Jesus gave to St. Peter and his successors — the popes — Pope Francis created 19 new cardinals in the presence of retired Pope Benedict XVI.

To the great surprise of most people present, the retired pope entered St. Peter’s Basilica about 15 minutes before the new cardinals and Pope Francis. Wearing a long white coat and using a cane, he took a seat in the front row next to Lebanese Cardinal Bechara Rai, patriarch of the Maronite Catholic Church.

Pope Benedict’s presence at the consistory Feb. 22, the feast of the Chair of Peter, marked the first time he had joined Pope Francis for a public prayer service in the basilica. Pope Benedict resigned Feb. 28, 2013, becoming the first pope in almost 600 years to do so.

Cardinal Theodore E. McCarrick, retired archbishop of Washington, said all the already existing cardinals went over to greet Pope Benedict. "The ushers kept saying, ‘Please, your eminences, take your seats, the Holy Father is coming,’ and we thought, ‘But, but ….’"

Before beginning the service, Pope Francis walked over to Pope Benedict, who removed his zucchetto to greet Pope Francis. The scene was repeated at the end of the consistory. 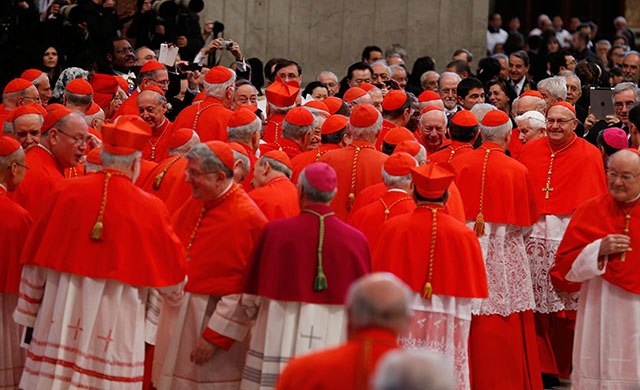 Cardinals crowd around Pope Benedict XVI after his arrival a few minutes before the start of a consistory led by Pope Francis in St. Peter’s Basilica at the Vatican Feb. 22. Pope Benedict’s unexpected appearance was the first time he attended a public liturgy since his retirement.

The new cardinals, including Cardinal Gerald Lacroix of Quebec and Vincent Nichols of Westminster, England, publicly recited the Creed and swore obedience to the pope and his successors before receiving from Pope Francis a red hat, a ring and the assignment of a "titular church" in Rome, becoming part of the clergy of the pope’s diocese.

After they received their red hats, each of the new cardinals walked over to Pope Benedict and greeted him.

Cardinal Lacroix, accompanied by his mother and father at an afternoon reception, said Pope Benedict’s presence "surprised me so much that I broke down in tears."

When he went to greet the retired pope, he said he told him, "Holy Father, you are the one who called me to be a bishop." 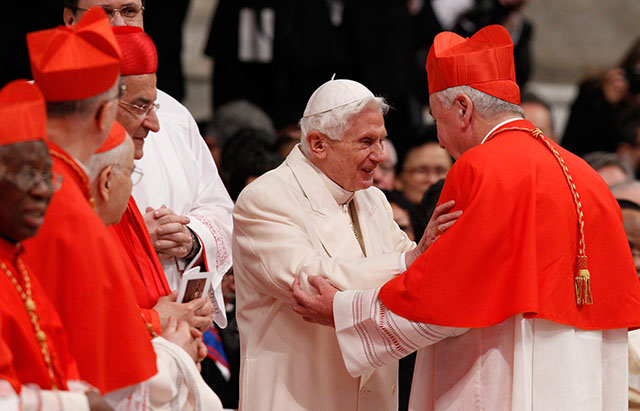 Pope Benedict XVI greets New Cardinal Vincent Nichols of Westminster, England, during a consistory in St. Peter’s Basilica at the Vatican Feb. 22. Pope Francis created 19 new cardinals in the presence of Pope Benedict XVI, who made his first public appearance at a liturgy since his retirement.

Only 18 of the archbishops Pope Francis had chosen to be among the first cardinals created during his pontificate were present.

The oldest of the new cardinals — and now the oldest cardinal in the world — Cardinal Loris Capovilla, 98, was not present at the ceremony although he became a cardinal the moment Pope Francis pronounced his name. A papal delegate will deliver his red hat to his home in northern Italy.

In his homily Pope Francis did not mention the standard point that the cardinals’ new red vestments are symbols of the call to serve Christ and his church to the point of shedding their blood if necessary. Rather, he focused on their being called to follow Christ more closely, to build up the unity of the church and to proclaim the Gospel more courageously.

The Bible, he said, is filled with stories of Jesus walking with his disciples and teaching them as they traveled.

"This is important," the pope said. "Jesus did not come to teach a philosophy, an ideology, but rather a ‘way,’ a journey to be undertaken with him, and we learn the way as we go, by walking."

After listening to a reading of Mark 10:32-45, Pope Francis also spoke about the very human, worldly temptation of "rivalry, jealousy (and) factions" the first disciples faced.

The reading is a warning to the cardinals and to all Christians to put aside concerns of power and favoritism and "to become ever more of one heart and soul" gathered around the Lord, he said.

Pope Francis told the new cardinals, who come from 15 different countries — including very poor nations like Haiti and Ivory Coast — that the church "needs you, your cooperation and, even more, your communion, communion with me and among yourselves."

"The church needs your courage," he said, "to proclaim the Gospel at all times" and "to bear witness to the truth."

The pope also told the cardinals that the church needs their "compassion, especially at this time of pain and suffering for so many countries throughout the world," and for so many Christians who face discrimination and persecution. "We must struggle against all discrimination," he said.

"The church needs us also to be peacemakers, building peace by our actions, hopes and prayers," he said.

The consistory brought to 218 the total number of cardinals in the world; 122 cardinals are under the age of 80 and eligible to vote in a conclave. 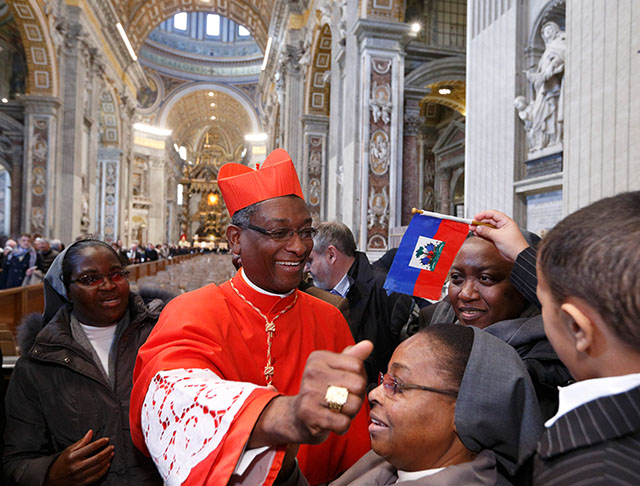 New Cardinal Chibly Langlois of Les Cayes, Haiti, greets guests after a consistory at which he was made a cardinal by Pope Francis in St. Peter’s Basilica at the Vatican Feb. 22.

The 18 cardinals who received their red hats from the pope were Cardinals:

— Lorenzo Baldisseri, general secretary of the Synod of Bishops, Italian, 73.

— Gerhard Muller, prefect of the Congregation for the Doctrine of the Faith, German, 66.

— Beniamino Stella, prefect of the Congregation for Clergy, Italian, 72.