Pope: God is greater than our sins - Catholic Courier 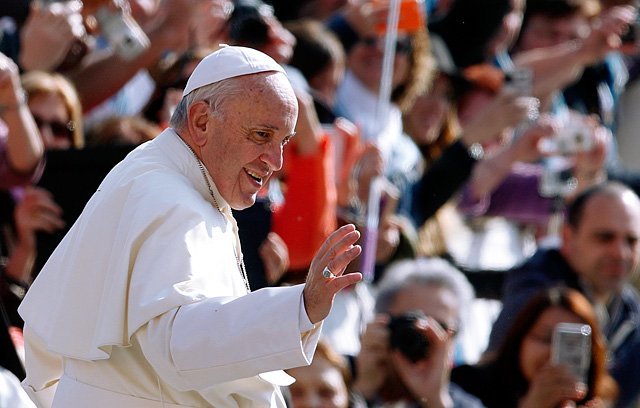 Pope Francis greets the crowd during his general audience in St. Peter's Square at the Vatican March 30. The power of God's forgiveness "is greater than our sins," the pope said in this audience talk.

VATICAN CITY (CNS) — The power of God’s forgiveness "is greater than our sins," Pope Francis said.

Christians have "the certainty that he will never abandon us," the pope said at his weekly general audience in St. Peter’s Square March 30.

"If you fall into sin, stand up! When a child falls, what does he do? He raises his hand to his mother or father to help him up," the pope said. "Raise your hand and God will help you; this is the dignity of God’s forgiveness."

With tens of thousands of people gathered in St. Peter’s Square, the pope reflected on Psalm 51, King David’s hymn of repentance after committing adultery with Bathsheba and murdering her husband, Uriah the Hittite. The psalm often is called the "Miserere" from the Latin opening of David’s plea, "Have mercy on me, O God."

Those who pray the psalm, Pope Francis said, are called to be like David who, despite the gravity of his sins, was genuinely repentant and confident in God’s mercy.

"In this prayer, humankind’s true need is manifested: The only thing we really need in our lives is to be forgiven, freed from evil and its deadly consequences," the pope said.

While everyone has experiences of sin and hopelessness, the pope encouraged Christians to never forget that "God is greater than our sin."

"God is greater than all the sins that we can commit and his love is an ocean in which we immerse ourselves without fear of being overwhelmed," he said. "God’s forgiveness means giving us the assurance that he will never abandon us."

In recognizing their sins, the pope said, Christians not only seek forgiveness but also celebrate God’s justice and holiness. God does not simply wipe away sins like a dry cleaner taking out a stain but completely destroys it "right from the root without leaving any trace."

The pope told the people in the square that through the grace of God’s forgiveness "we become new creatures" with a "new heart, a new spirit and a new life." As forgiven sinners, he added, Christians are called to share this gift with those in need of God’s mercy.

"May the Lord grant us, through the intercession of Mary, the mother of mercy, to be witnesses of his forgiveness, which purifies the heart and transforms life."