Pope: God sent his son to show mercy to sinners, not punish them - Catholic Courier 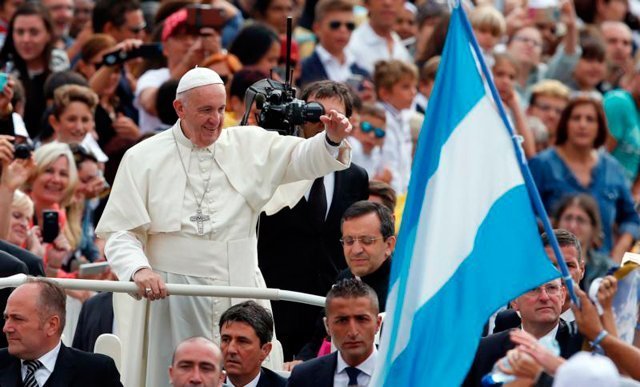 Argentina's flag is seen as Pope Francis arrives to lead his general audience in St. Peter's Square at the Vatican Sept. 7.

VATICAN CITY (CNS) — God did not send his son into the world to cast off the wicked but to offer them a path to conversion through mercy and love, Pope Francis said.

Those who object to Jesus’ mercy toward sinners often create an "image of God that impedes them from enjoying his real presence," the pope said Sept. 7 at his weekly general audience.

"Some carve out a ‘do-it-yourself’ faith that reduces God to the limited space of their own desires and their own convictions," the pope said. "Others reduce God to a false idol; using his holy name to justify their own interests or even to incite hatred and violence."

An estimated 25,000 people attended the audience in St. Peter’s Square; many visitors were in Rome for the Sept. 4 canonization of St. Teresa of Kolkata.

Before delivering his final blessing, the pope called on young people to follow her example and be "artisans of mercy." He asked those who are ill "to feel her compassionate closeness, especially in the hour of the cross."

In his main talk, the pope reflected on the Gospel story in which John the Baptist, while imprisoned, sends his disciples to ask Jesus if he is "the one who is to come, or should we look for another?"

Jesus answered, "Go and tell John what you hear and see: the blind regain their sight, the lame walk, lepers are cleansed, the deaf hear, the dead are raised, and the poor have the good news proclaimed to them; and blessed is the one who takes no offense at me."

John the Baptist, who often preached the coming of the Messiah as a judge who would come to "reward the good and punish the bad," now suffers doubt in the darkness of his cell because he does "not understand this style," the pope said.

However, he said, Jesus’ response is a clear message to his followers and to the church.

"God did not send his son into the world to punish sinners nor to annihilate the wicked. They are instead called to conversion so that, by seeing the signs of divine goodness, they may find their way back," Pope Francis said.

Jesus’ gesture of showing mercy to sinners is an act that often provokes doubt and even scandal to those who believe in a God that comes to rain down justice on the wicked, he said.

Nevertheless, "if the obstacle to believing is above all his acts of mercy, this means that you have a false image of the Messiah. Blessed are those who, in front of Jesus’ gestures and words, give praise to God who is in heaven," the pope said.

Jesus’ warning to those who are scandalized by God’s mercy serve as a warning for men and women today who create a false image of God, often perceiving him as a "psychological refuge" that offers them reassurance during difficult moments or reducing Jesus to just one of many teachers of ethics throughout history, he explained.

Nevertheless, these erroneous perceptions "stifle faith into a purely personal relationship with Jesus, canceling out his missionary impulse that is capable of transforming the world and history."

Christians, he said, believe in the "God of Jesus Christ" who wants us "to grow in the living experience of his mystery of love."

"Let us commit ourselves to not put any obstacles to the Father’s merciful acts," Pope Francis said. "Instead, let us ask for the gift of great faith to become signs and instruments of mercy."