Pope has been diagnosed with cold; symptoms unrelated to coronavirus - Catholic Courier 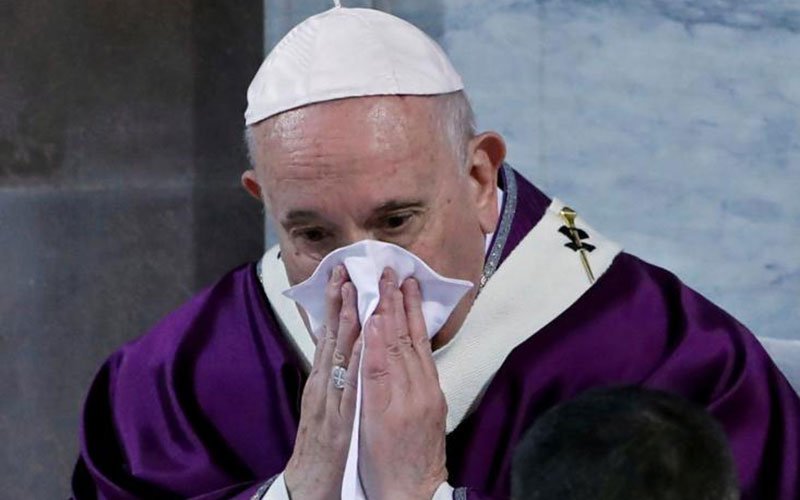 Pope Francis uses a handkerchief during Ash Wednesday Mass at the Basilica of Santa Sabina in Rome Feb. 26, 2020.

Pope Francis skips Lenten retreat with Curia due to cold

VATICAN CITY (CNS) — Pope Francis has a common cold and has no symptoms that could be attributed to another illness, the Vatican said.

Matteo Bruni, director of the Vatican press office, released a brief statement March 3 in response to reporters’ questions, including about an Italian newspaper’s unsourced claim the pope had been tested and tested negative for the coronavirus.

Bruni said, “The cold the Holy Father was diagnosed with recently is running its course, with no symptoms related to other pathologies.”

“In the meantime, Pope Francis celebrates Mass daily and is following the spiritual exercises taking place at the Divine Master House in Ariccia,” he said, referring to the annual Lenten retreat for top officials of the Roman Curia.

The pope showed signs of a cold Feb. 26 during his Wednesday general audience in St. Peter’s Square, but he still led an outdoor procession and the Ash Wednesday Mass later the same day.

He canceled his participation in other large public events and meetings with large groups beginning Feb. 27 but kept other commitments, meeting and shaking hands with people at smaller meetings throughout the day and weekend.

Bruni said Feb. 27 the cancellations were due to “a slight indisposition,” and the pope preferred to remain close to the Domus Sanctae Marthae, where he lives.

At his previous public appearance, March 1, the pope told pilgrims gathered for the Sunday Angelus that he would be unable to attend the annual retreat March 1-6 with curia officials.

“Unfortunately, my cold forces me to not participate,” the pope said, adding that he would “follow the meditations from here” and “spiritually join the curia and all the people who are living this moment of prayer, doing spiritual exercises at home.”

Concerns about the spread of coronavirus continued as the Italian health ministry confirmed more than 2,200 people have tested positive for COVID-19 and 79 people had died as of March 3.