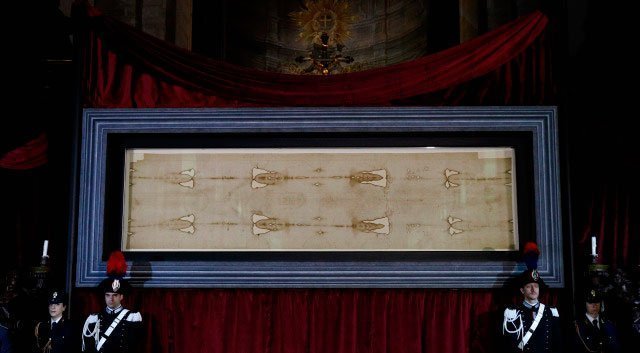 The Shroud of Turin is displayed during a preview for journalists at the Cathedral of St. John the Baptist in Turin, Italy, April 18. A public exposition of the shroud, believed by many to be the burial cloth of Jesus, runs from April 19 through June 24.

VATICAN CITY (CNS) — With financial assistance from Pope Francis, a Rome parish led 50 homeless and poor people on a pilgrimage to see the Shroud of Turin June 4 and has provided the money needed for another Rome parish to do the same a week later.

Archbishop Konrad Krajewski, the papal almoner, said the pope supported the pilgrimages particularly as part of the preparation for his own trip to Turin June 21-22 to venerate the shroud, which has been on public display since late April.

Addressing pilgrims at the Vatican just before the exhibition of the shroud, venerated by many as the burial cloth of Jesus, Pope Francis said he hoped seeing the 14-foot by 4-foot linen cloth with a photonegative image of a bearded man would "help us all to find in Jesus Christ the merciful face of God and to recognize it in the faces of our brothers and sisters, especially those who suffer most."

The group of homeless, poor and sick people who visited the shroud June 4 went on a pilgrimage organized by Rome’s Santa Lucia parish, where they regularly eat and receive other assistance. The pastor, Father Antonio Nicolai, said Pope Francis offered his help with "the conviction that, like the shroud, they represented the suffering face of the Lord Jesus."

The papal donation helped pay for the bus — Turin is about 430 miles north of Rome — for meals and for lodging at the church-run guesthouse of a local hospital. Archbishop Krajewski said the pope also provided a little bit of cash for each of the pilgrims so they could buy coffee or a snack during the trip.

The other group of poor or homeless pilgrims in Rome are participating in a mid-June pilgrimage organized by the Parish of Sant’Eustachio.