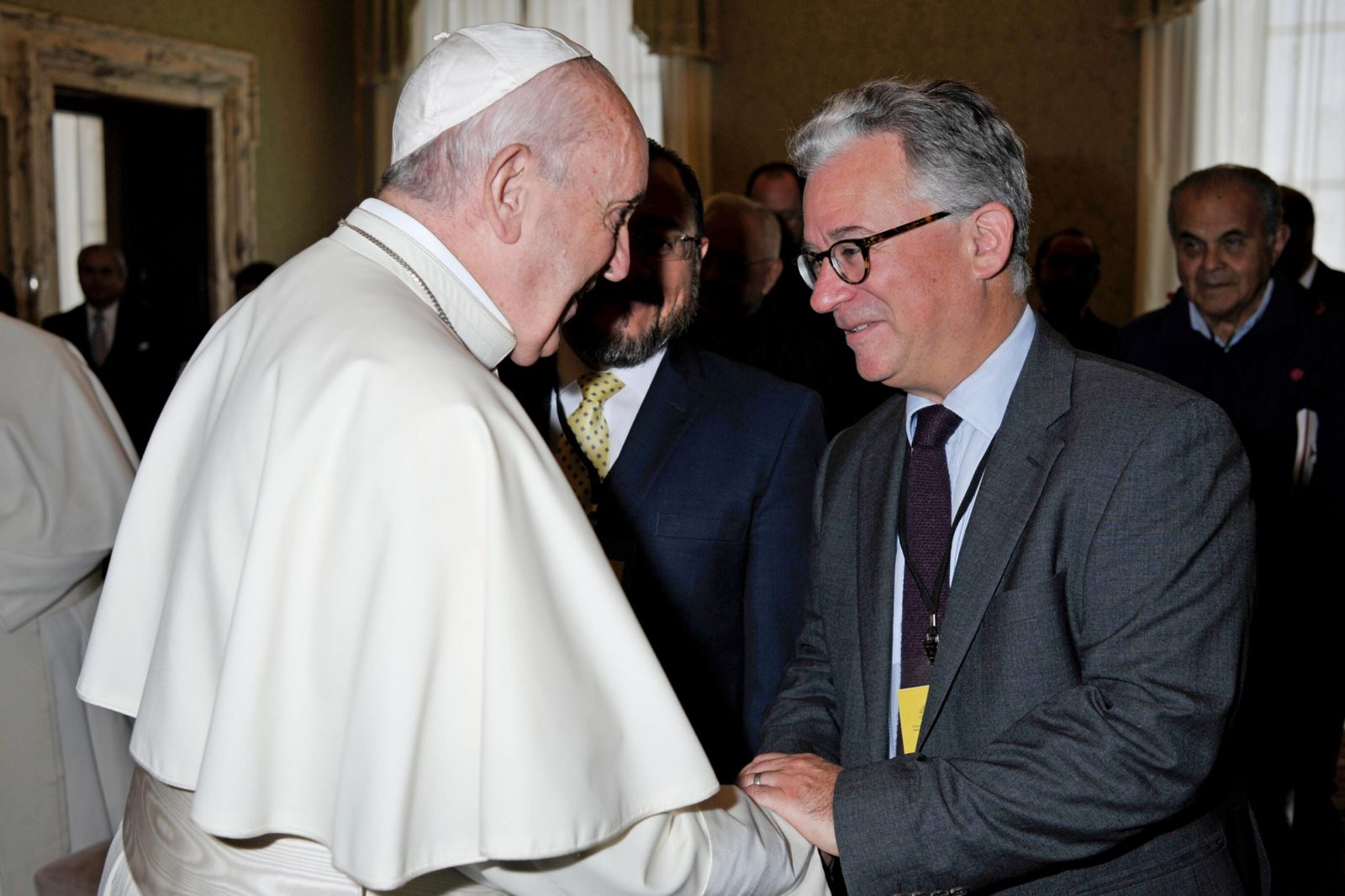 Pope Francis meets author Austen Ivereigh at the Vatican in October 2019. The pope collaborated with Ivereigh on the book, "Let Us Dream: The Path to A Better Future." In the book the pope said he experienced three "COVID moments" in his lifetime: lung problems that threatened his life when he was 21; his "displacement" in Germany in 1986 for studies; and when he was sent away to Cordoba, Argentina, for almost two years in the early 1990s. "Let Us Dream" will be published Dec. 1 by Simon & Schuster. (CNS photo by Vatican Media)

VATICAN CITY (CNS) — While the coronavirus lockdowns and restrictions have interrupted people’s lives and brought suffering on a global scale, every individual — including the pope — has or will experience traumatic interruptions in their lives, Pope Francis said in a new book.

“Illness, the failure of a marriage or a business, some great disappointment or betrayal,” he said, are moments that “generate a tension, a crisis that reveals what is in our hearts.”

In “Let Us Dream: The Path to A Better Future,” a book written with author Austen Ivereigh, Pope Francis said he had experienced three “COVID moments” in his lifetime: lung problems that threatened his life when he was 21; his “displacement” in Germany in 1986 for studies; and when he was sent away to Cordoba, Argentina, for almost two years in the early 1990s.

“Let Us Dream” will be published Dec. 1 by Simon & Schuster. The section on what the pope called his “personal COVIDs” was excerpted in Italian newspapers Nov. 23.

In those major moments of challenge and pain, Pope Francis wrote, “what I learned was that you suffer a lot, but if you allow it to change you, you come out better. But if you dig in, you come out worse.”

Writing about his diseased lung, the pope said, “I remember the date: Aug. 13, 1957. I got taken to hospital by a (seminary) prefect who realized mine was not the kind of flu you treat with aspirin. Straightaway they took a liter and a half of water out of the lung, and I remained there fighting for my life.”

He was in his second year at the diocesan seminary and it was his “first experience of limit, of pain and loneliness,” he said. “It changed the way I saw life.”

“For months, I didn’t know who I was and whether I would live or die. The doctors had no idea whether I’d make it either,” the pope wrote. “I remember hugging my mother and saying: ‘Just tell me if I’m going to die.”

After three months in the hospital, “they operated to take out the upper right lobe of one of the lungs,” he said. “I have some sense of how people with coronavirus feel as they struggle to breathe on ventilators.”

One of the nurses, “Sister Cornelia Caraglio, saved my life” by doubling his antibiotics, he said. “Because of her regular contact with sick people, she understood better than the doctor what they needed, and she had the courage to act on her knowledge.”

“People came in to tell me I was going to be fine, how with all that pain I’d never have to suffer again — really dumb things, empty words,” he said.

Instead, he learned from a nun who had prepared him for his first Communion and would come and hold his hand, how important it was to sit with people, touch them and keep words to a minimum.

The time in the hospital recovering, he said, gave him the time and space he needed to “rethink my vocation” and explore his longing to enter a religious order rather than the diocesan priesthood. It was then that he decided to join the Jesuits.