Pope: Jesus’ birth is not ‘fairy tale,’ but call to live the Gospel - Catholic Courier 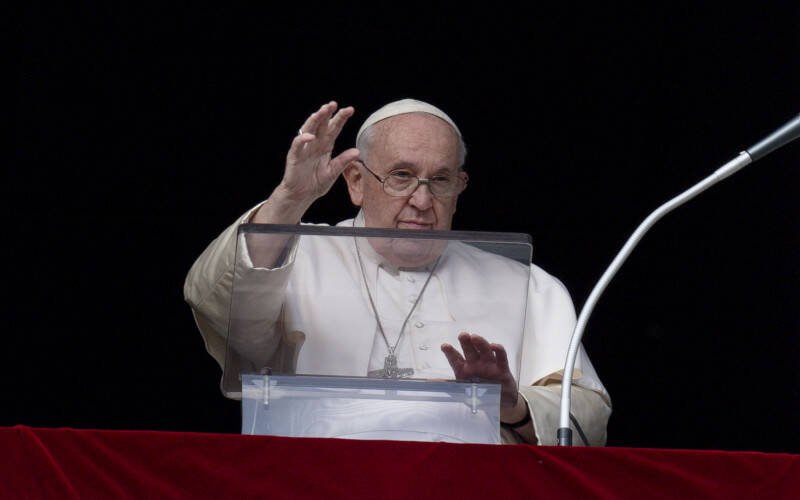 Pope Francis waves to visitors and pilgrims gathered in St. Peter’s Square at the Vatican for the recitation of the Angelus prayer Dec. 26, the feast of St. Stephen. (CNS photo by Vatican Media)

VATICAN CITY (CNS) — The day after Christmas the Catholic Church celebrates the feast of St. Stephen, the first Christian martyr, which emphasizes how the story of Jesus’ birth is not a “fairy tale,” but a call to live as witnesses of the Gospel, Pope Francis said.

Marking the feast Dec. 26, a public holiday in Italy, Pope Francis led the recitation of the Angelus prayer at noon with thousands of visitors and pilgrims gathered in St. Peter’s Square.

By putting the martyrdom of St. Stephen on the calendar the day after Christmas, he said, “the liturgy really seems to want to steer us away from the world of lights, lunches and gifts in which we might indulge somewhat in these days.”

The point, he said, is that “Christmas is not the fairy tale of the birth of a king, but it is the coming of the Savior, who frees us from evil by taking upon himself our evil: selfishness, sin, death.”

St. Stephen shared his faith and witness by loving those he served

The Bible says St. Stephen was a deacon, the pope said, which “means that his first witness was not given in words, but through the love with which he served those most in need.”

At the same time, the Acts of the Apostles describes how Stephen spoke of Jesus to those he met, sharing with them the faith.

“However, his greatest testimony is yet another: that he knew how to unite charity and proclamation,” the pope said, by “following the example of Jesus” and forgiving those who were about to kill him.

Over the holidays, when many people are spending time with family and friends, there may be “someone with whom we have not gotten along, who has hurt us, with whom we have never mended the relationship,” the pope said. “Let us ask the newborn Jesus for the newness of a heart that can forgive: We all need a forgiving heart!”

Pope Francis also used the occasion once again to wish people peace — “peace in families, peace in parishes and religious communities, peace in movements and associations, peace for those peoples tormented by war, peace for the dear and embattled Ukraine.”

Noting that many people in the crowd held Ukrainian flags, the pope again said, “Let us ask for peace for this suffering people!”