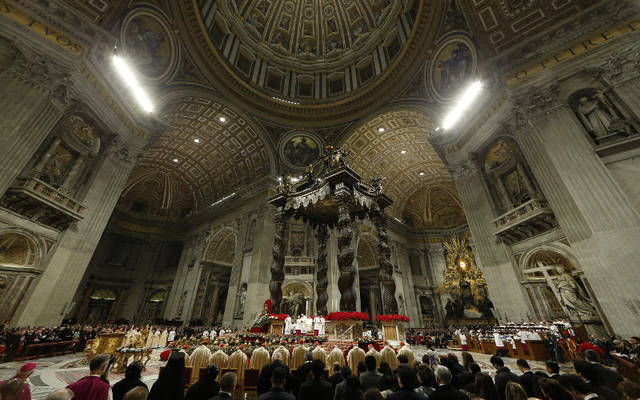 VATICAN CITY (CNS) — Jesus’ birth in a stable, God’s coming to earth in extreme simplicity, teaches Christians that love is more valuable than anything else and is what will change the world, Pope Francis said.

“In Bethlehem, we discover that the life of God can enter into our hearts and dwell there. If we welcome that gift, history changes, starting with each of us,” the pope said in his homily at Mass Dec. 24 in St. Peter’s Basilica.

After the singing of the “Kalenda,” the ancient Christmas proclamation, and the ringing of the basilica’s bells, Pope Francis lifted a cloth revealing a statue of the baby Jesus, and he gently kissed it.

St. Peter’s Basilica was filled with a new light for the Christmas Mass. For the first time, the basilica’s new LED lighting was used — 700 light fixtures contain 100,000 LEDs and, according to the Vatican, will bring an energy savings of 90 percent.

In his homily, the pope noted how the Christmas story leads believers back to Bethlehem, which means “house of bread.”

“Tonight,” he said, “as we hear the summons to go up to Bethlehem, the house of bread, let us ask ourselves: What is the bread of my life, what is it that I cannot do without? Is it the Lord, or something else?”

“Then,” he continued, “as we enter the stable, sensing in the tender poverty of the newborn child a new fragrance of life, the odor of simplicity, let us ask ourselves: Do I really need all these material objects and complicated recipes for living? Can I manage without all these unnecessary extras and live a life of greater simplicity?”

When sin entered the world with Adam and Eve, “mankind became greedy and voracious,” he said. “In our day, for many people, life’s meaning is found in possessing, in having an excess of material objects. An insatiable greed marks all human history, even today, when, paradoxically, a few dine luxuriantly while all too many go without the daily bread needed to survive.”

But for those who welcome the birth of Jesus and strive to follow him, the pope said, the center of life is “no longer my ravenous and selfish ego, but the one who is born and lives for love.”

Standing before the manger teaches believers that what matters in life “is not material riches but love, not gluttony but charity, not ostentation but simplicity.”

Another result of sin, he said, is fear, including fear of God.

But the night Jesus was born, the shepherds heard an angel telling them not to be afraid.

“How many times do we hear this phrase in the Gospels: ‘Be not afraid’? It seems that God is constantly repeating it as he seeks us out,” the pope said.

“Bethlehem is the remedy” for people’s fear because despite saying “no” to God, “God constantly says, ‘yes,’” the pope said. “He will always be God-with-us. And lest his presence inspire fear, he makes himself a tender child.”

”Be not afraid: these words were not spoken to saints but to shepherds, simple people who in those days were certainly not known for their refined manners and piety,” he said. “The Son of David was born among shepherds in order to tell us that never again will anyone be alone and abandoned; we have a shepherd who conquers our every fear and loves us all, without exception.”

The shepherds, he said, also are a reminder to Christians to remain awake, watchful and full of hope, even “amid the gloom of our problems.”

The pope ended his homily with a prayer: “I want to come to Bethlehem, Lord, because there you await me. I want to realize that you, lying in a manger, are the bread of my life. I need the tender fragrance of your love so that I, in turn, can be bread broken for the world.

“Take me upon your shoulders, Good Shepherd; loved by you, I will be able to love my brothers and sisters and to take them by the hand. Then it will be Christmas, when I can say to you: ‘Lord you know everything; you know that I love you,’” he prayed.