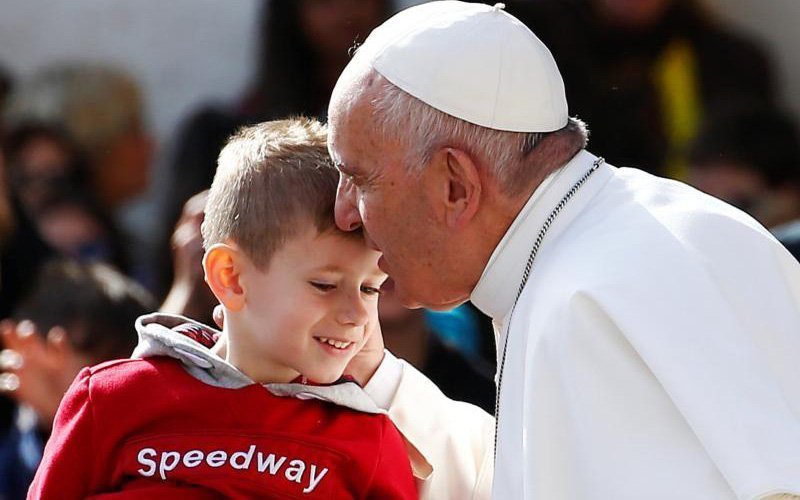 Pope Francis greets a boy during his general audience in St. Peter's Square at the Vatican April 24, 2019. (CNS photo by Yara Nardi/Reuters)

VATICAN CITY (CNS) — The scales of justice cannot solve everything, especially when it comes to stopping a cycle of evil vengeance, Pope Francis said.

“Evil knows revenge and if it is not halted, it risks spreading, suffocating the whole world,” he said April 24 during his weekly general audience.

Christians must forgive and love others even beyond what is due to stop the cycle of evil and to start things anew, he told thousands of people gathered in St. Peter’s Square, which was still decorated with bright yellow, red and other colorful flowers from his Easter celebrations.

Pope Francis continued his audience talks about the Lord’s Prayer by looking at how people ask God to “forgive us our trespasses as we forgive those who trespass against us.”

The use of the word “trespasses” in the original Greek of the Gospel means “being in debt,” so this part of the prayer recognizes how much people are in debt to God, especially for the gift of life and his infinite love and mercy, the pope said.

The so-called “‘self-made man’ doesn’t exist in the church,” he said, because Christians recognize the divine gifts and graces bestowed on them and the “beneficial conditions in life” they received from others.

Those who seek to live a Christian life also realize “there always will be something” for which they will need to ask God’s forgiveness, for example, for being too lazy or letting rancor take over one’s heart, he said.

It would have been wonderful, the pope said, if the prayer only asked God to forgive one’s debts to him, however, God asks for more.

“God’s grace, so abundant, is always challenging” because God asks people to do unto others, what he has done for them. “God, who is good, invites all of us to be good,” the pope added.

“Whoever has received a lot must learn to give a lot and not keep it all for oneself,” Pope Francis said. God always offers his infinite love, mercy and forgiveness “vertically,” from heaven to earth, and he expects it to be redistributed and given anew, “horizontally,” among his children.

People are called to reflect that divine love and forgiveness onto others, he said, and create “a new relationship with our brothers and sisters,” with one’s friends, family, neighbors and even those “who have done something that is not wonderful.”

The pope explained how this could be seen in the Parable of the Unforgiving Servant (Mt. 18:21-35), in which a king forgave his servant’s enormous debt, but the same servant refused to forgive a much smaller debt he was owed by another. The king punished the servant for not showing the same pity and compassion he had received.

Jesus shows the power of forgiveness, he said.

“Not everything in life is resolved with justice. No. Especially where a counterweight to evil must be placed, someone must love beyond what is due, to rebegin a story of grace.”

Jesus replaces the law of revenge with the law of love: “What God has done for me, I return to you,” he said.

In the days after Easter, the pope asked people reflect on whether they are able to forgive, and if they feel they can’t, “ask the Lord for this grace because it is a grace” to be able to forgive.

“With a word, a hug, a smile, we can share with others that which we have received” — the even more precious gift of God’s forgiveness, the pope said.