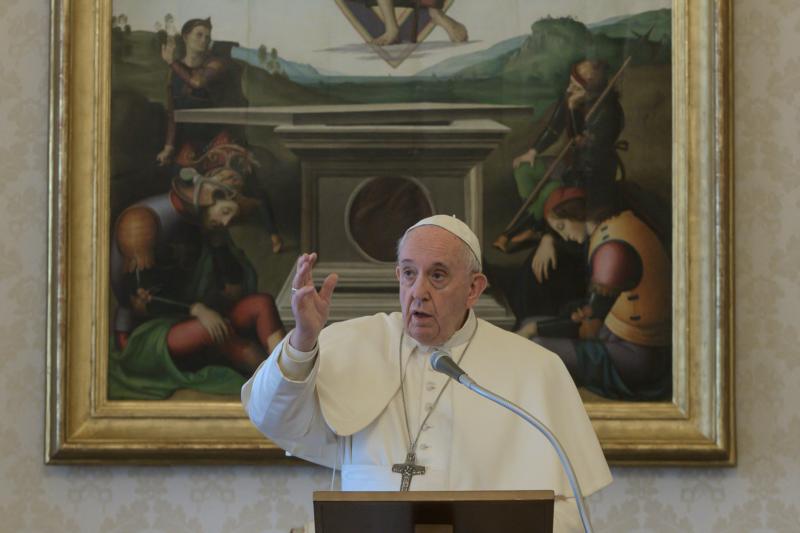 Pope Francis delivers his Angelus address from the library of the Apostolic Palace at the Vatican March 29, 2020. (CNS photo by Vatican Media)

VATICAN CITY (CNS) — Saying conflicts can never be resolved with war, Pope Francis added his support to a U.N. appeal for a global cease-fire amid the worldwide threat of the COVID-19 pandemic.

“May our joint effort against the pandemic lead everyone to recognize our need to strengthen our brotherly and sisterly ties as members of one human family,” the pope said March 29, after praying the Angelus in the library of the Apostolic Palace.

“In particular, may it inspire national leaders and other concerned parties to a renewed commitment to overcome rivalries. Conflicts are not resolved through war. It is necessary to overcome antagonism and differences through dialogue and a constructive search for peace,” he said.

The pope said he was adding his voice to support the appeal by U.N. Secretary-General Antonio Guterres for an immediate global cease-fire amid the COVID-19 pandemic.

The pope said he was inviting everyone to take part by “ceasing all forms of military hostilities, promoting the creation of corridors for humanitarian aid, being open to diplomacy and offering attention to those who find themselves in situations of great vulnerability.”

In his appeal March 23, Guterres had said, “The fury of the virus illustrates the folly of war.”

“Our world faces a common enemy — COVID-19. The virus does not care about nationality or ethnicity, faction or faith. It attacks all, relentlessly,” he said in a statement from New York.

However, he said, armed conflicts continue to rage around the world.

“In war-ravaged countries, health systems have collapsed. Health professionals, already few in number, have often been targeted. Refugees and others displaced by violent conflict are doubly vulnerable,” he said.

This is why, Guterres said, he was calling for an immediate global cease-fire.

“It is time to put armed conflict on lockdown and focus together on the true fight of our lives,” he said.