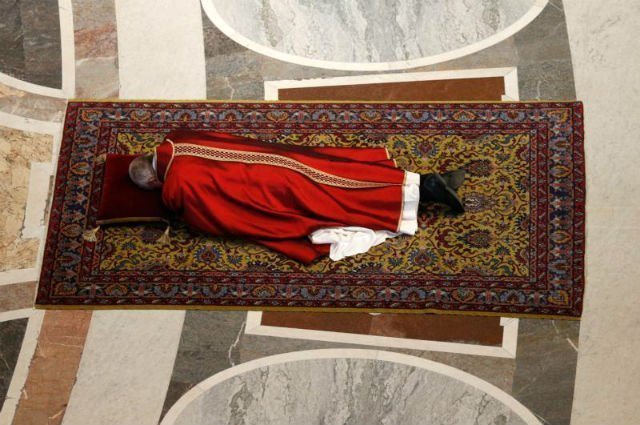 Pope Francis lies prostrate at the beginning of the Good Friday service in St. Peter's Basilica at the Vatican March 25.

VATICAN CITY (CNS) — Entering in silence and lying prostrate on the floor in front of the main altar of St. Peter’s Basilica, Pope Francis commemorated Jesus’ death on the cross.

Thousands of people joined the pope as he presided over the Liturgy of the Lord’s Passion March 25.

The solemn liturgy proceeded with the notable presence of security personnel and Italian police in and around the basilica amid concerns following the recent terrorist attack in Brussels.

Jesuit Father Federico Lombardi, the Vatican spokesman, denied a report by Italian journalist Luigi Bisignani, who said that for the first time since the papacy of Pius IX, Italian special forces were in Vatican City State protecting the pope.

Father Lombardi said that while there is "a daily fruitful cooperation between the Vatican Gendarmerie and the Italian police organizations," Bisignani’s report "has no foundation."
"The Easter celebrations presided by the Holy Father will take place as planned, taking care to ensure their safe conduct and a peaceful participation by the faithful," he said.
The pope began the Good Friday service processing down the central nave of the basilica and, in a sign of adoration and penance, lay face down in front of the altar.
As is customary, the homily was delivered by the preacher of the papal household, Capuchin Father Raniero Cantalamessa. Pope Francis was scheduled to speak briefly later that night at the end of the Stations of the Cross in Rome’s Colosseum.
In his homily, Father Cantalamessa said the Jubilee Year offers Christians an opportunity to see the true merciful face of God, who is often perceived as "one who intervenes with divine punishment to re-establish the order disrupted by evil."
"The Year of Mercy is a golden opportunity to restore the true image of the biblical God who not only has mercy, but is mercy," he said.
God’s love and mercy, he continued, do not change because of the sins of men and women, but make a "qualitative leap" from being a gift to becoming an act of forgiveness.
However, he explained, God’s justice is also often misinterpreted and, although there will come a time when each person faces his or her due, St. Paul speaks of another event "occurring now" that was revealed to humanity through Christ.
"God shows his righteousness and justice by having mercy. This is the great revelation," he said.
"Therefore, to say ‘the righteousness of God has been manifested’ is like saying that God’s goodness, his love, his mercy, has been revealed. God’s justice not only does not contradict his mercy, but consists precisely in mercy," he said.
Father Cantalamessa said that the time has come for Christians to realize that vengeance, not justice, is the opposite of mercy.
Referring to the terrorist attack in Brussels, Father Cantalamessa said such hate and brutality help to understand Christ’s words on the cross: "Father, forgive them, for they know not what they do."

"No matter how far the hate of human beings can go, the love of God always has been, and will be, greater," he said. "In these current circumstances, Paul’s exhortation is addressed to us: ‘Do not be overcome by evil, but overcome evil with good.’"

Vengeance, which is often perceived in movies and video games "as the victory of a good hero," must be demythologized, the preacher said. Most of the world’s suffering, whether in personal relationships or between nations, comes from a desire for revenge, he said.

"There is only one thing that can truly save the world: mercy. The mercy of God for human beings and the mercy of human beings for each other. In particular, it can save the most precious and most fragile thing in the world at this time: marriage and the family," he said.

Leading the faithful in prayer, Father Cantalamessa prayed that God "remove any desire for vengeance from the hearts of individuals, families and nations and make us fall in love with mercy."