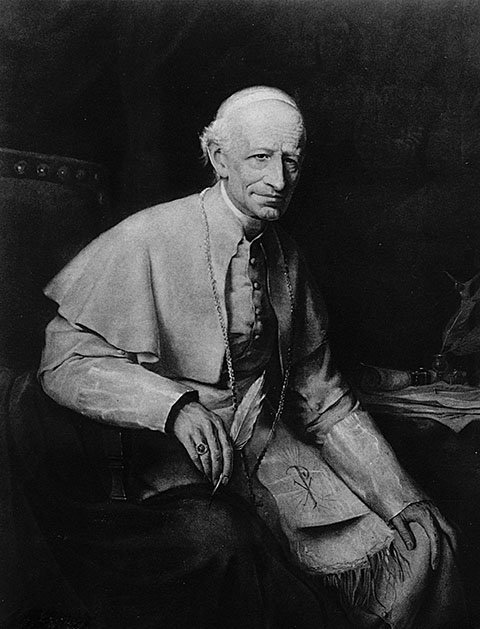 This portrait of Pope Leo XIII, pontiff from 1878 to 1903, shows him holding a quill pen. The pope, credited with being the founder of Catholic social teaching, anonymously crafted Latin riddles for a Roman magazine.

VATICAN CITY (CNS) — Going by the pseudonym "X," Pope Leo XIII anonymously crafted poetic puzzles in Latin for a Roman periodical at the turn of the 19th century.

The pope created lengthy riddles, known as "charades," in Latin in which readers had to guess a rebus-like answer from two or more words that together formed the syllables of a new word.

Eight of his puzzles were published anonymously in "Vox Urbis," a Rome newspaper that was printed entirely in Latin between 1898-1913, according to an article in the Vatican newspaper, L’Osservatore Romano.

A reader who submitted the correct answer to the riddle would receive a book of Latin poetry written by either Pope Leo or another noted Catholic figure.

The identity of the mysterious riddle-maker, however, was soon revealed by a French reporter covering the Vatican for the daily newspaper Le Figaro.

Felix Ziegler published his scoop Jan. 9, 1899, a year after the puzzles started appearing, revealing that "Mr. X" was, in fact, the reigning pope, the Vatican newspaper said July 20.

In the pope’s hometown, Carpineto Romano, which is about 35 miles southeast of Rome, students at the middle school now named for him have published 26 of the pope’s Latin puzzles in a new book titled, "Aenigmata. The Charades of Pope Leo XIII."

Three middle school teachers and their pupils said they have included puzzles they found, but which had never been published before.

One example of the pope’s Latin riddles talked of a "little boat nimbly dancing," that sprung a leak as it "welcomed the shore so near advancing."

"The whole your eyes have known, your pallid cheeks have shown; for oh! the swelling tide no bravest heart could hide, when your dear mother died," continues the translation of part of the riddle-poem.

Pope Leo, who headed the universal church from 1878 to 1903, had the fourth-longest pontificate in history, after being nudged out of third place by St. John Paul II.

He wrote 86 encyclicals, including the church’s groundbreaking "Rerum Novarum," which ushered in the era of Catholic social teaching.

Known for his openness to historical sciences, Pope Leo ordered in 1881 that the Vatican Secret Archives be open to researchers and he formally established the Vatican Observatory in 1891 as a visible sign of the church’s centuries-old support for science.

A trained Vatican diplomat and man of culture, the pope was also a member of an exclusive society of learning founded in Rome in 1690 called the Academy of Arcadia, whose purpose was to "wage war on the bad taste" engulfing baroque Italy. Pope Leo, whose club name was "Neandro Ecateo," was the last pope to be a member of the circle of poets, artists, musicians and highly cultured aristocrats and religious.

The pope was also passionate about hunting and viniculture. Unable to leave the confines of the Vatican after Italy was unified and the papal states brought to an end in 1870, he pursued his hobbies in the Vatican Gardens.

He had a wooden blind set up to hide in while trapping birds, which he then would set free again immediately.

He also had his own small vineyard, which, according to one historical account, he tended himself, hoeing out the weeds, and visiting often for moments of prayer and writing poetry.

Apparently, one day, gunfire was heard from the pope’s vineyard, triggering fears of a papal assassination attempt.

Instead, it turned out the pope had ordered a papal guard to send a salvo of bullets into the air to scare off the sparrows who were threatening his grape harvest.